Second of the second 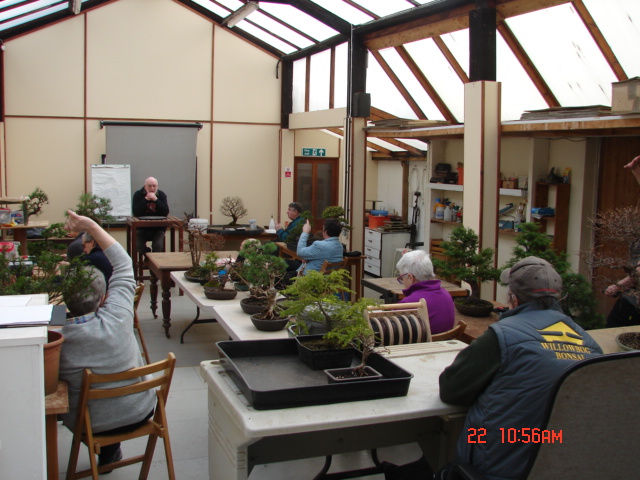 Yesterday, Saturday 22nd. was the second workshop of the second month of the year here at Willowbog Bonsai.  Last Saturday’s workshop was focused on re-potting and although yesterday was billed as a ” General ” still just about everyone had re-potting that they wanted to do. The intention when we decided to schedule two workshops each month was to spread the numbers between the two, however, as we had something like eleven participants for each, it seems not to be working out as planned. Pleased though as it shows a laudable degree of enthusiasm for the hobby and support for the nursery that we really appreciate.

In view of the amount of practical work that the participants required to get done we [ I ] managed to curtail the discussion period to only just over the hour, perhaps understandably the main topic dealt with was, as in most recent workshops, the inclement weather and the effects on our trees. 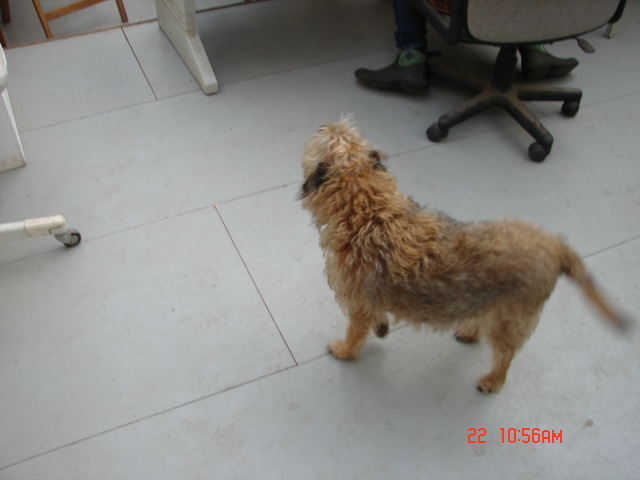 Tike remained alert throughout the whole day because Norma was in attendance, and when that is the case there is always the possibility of doggy treats being available ! 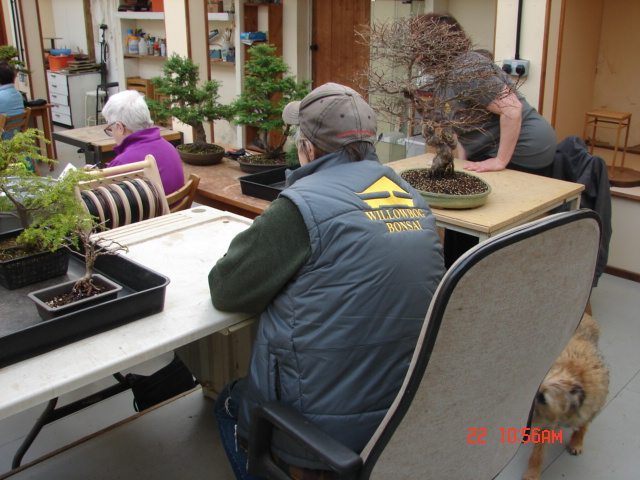 As with all the workshops I depended upon Caz and Scott to provide support, and it was such a busy day that the photographic record is rather curtailed. In this photo Caz shows off one of the new Willowbog Bonsai garments with our logo boldly displayed on the back of her quilted body warmer. 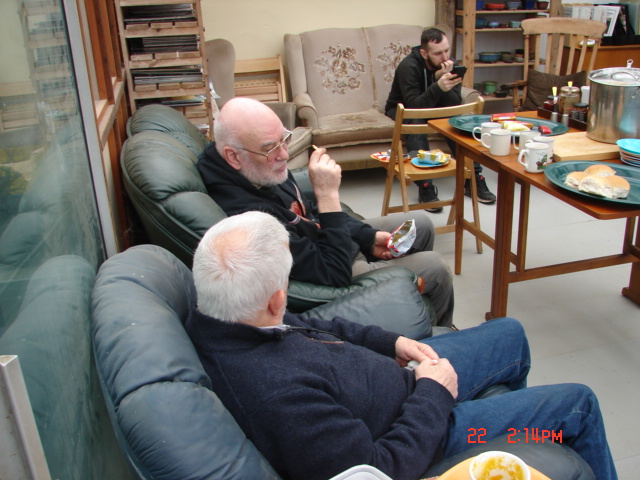 With such a lot of work to get through lunch was a little delayed, the time on this photo shows almost a quarter past two and I am still sat eating crisps and chatting to participant Will, Scott clearly taking a well earned break as well. 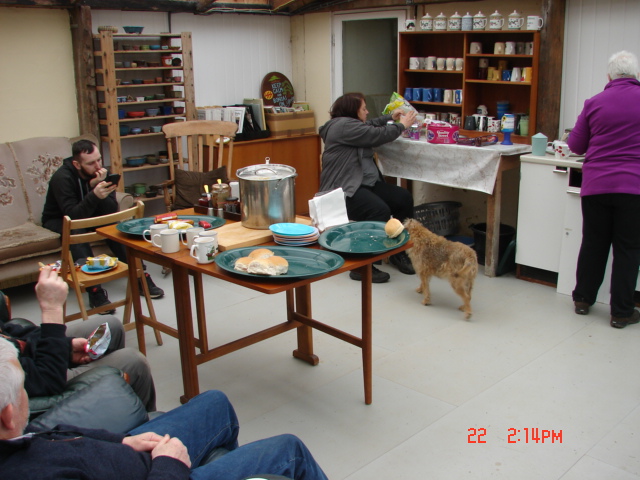 Tike in attendance on Angela in case a titbit might become available. 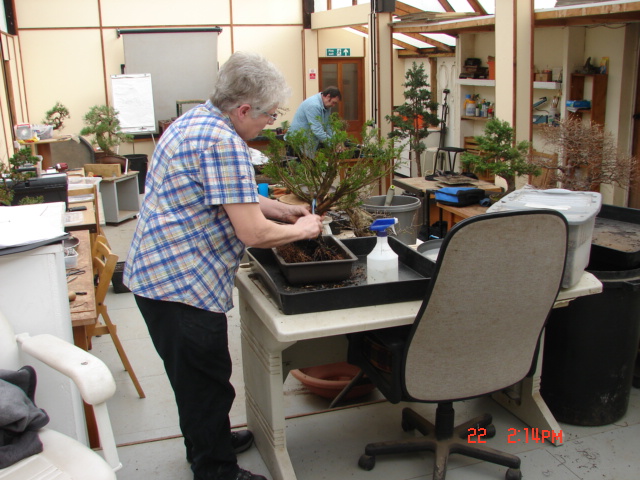 At the same time others were back at work though. Norma bust with a re-pot of a yew bit of raw material. 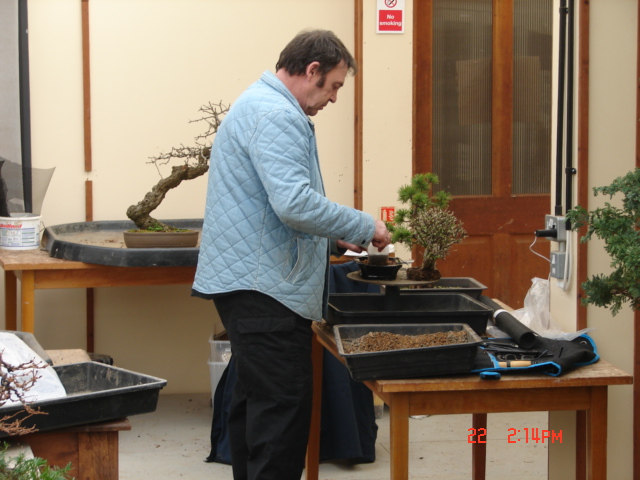 I cannot quite see which of his trees Darren was busy with at the same time. 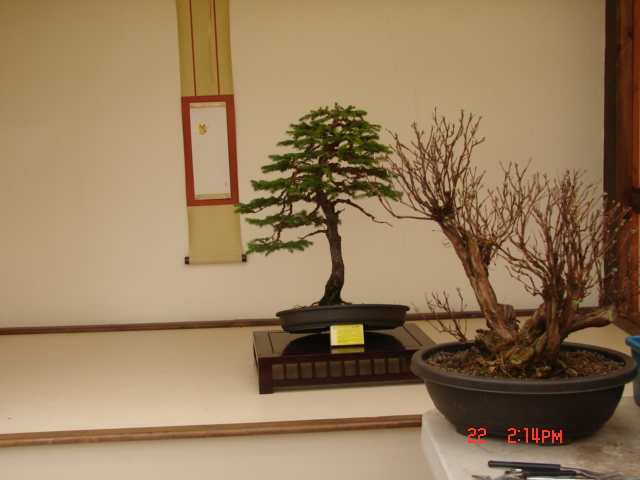 The space right in front of the studio tokonoma was being used to accommodate all of our participants so I did not stage a display as such, however, this chuhin spruce that Caz had just finished shaping looked so nice that we set it up there for folks to admire. The Potentilla in the right foreground was one of Will’s workshop trees. 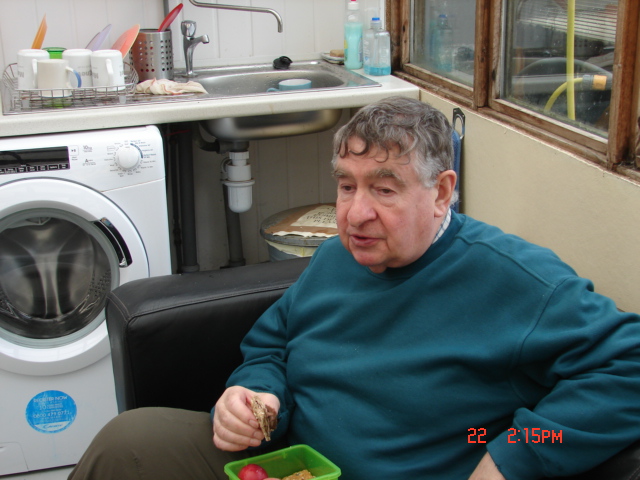 In fairness The G-man was late stopping for his lunch, he had a busy day accomplishing two important re-pots, a Cork-bark Chinese elm and a Common hawthorn, the Hawthorn looking especially good in a lovely Derek Aspinal pot that he had sourced from a secret supplier at a ridiculously reasonable price !! 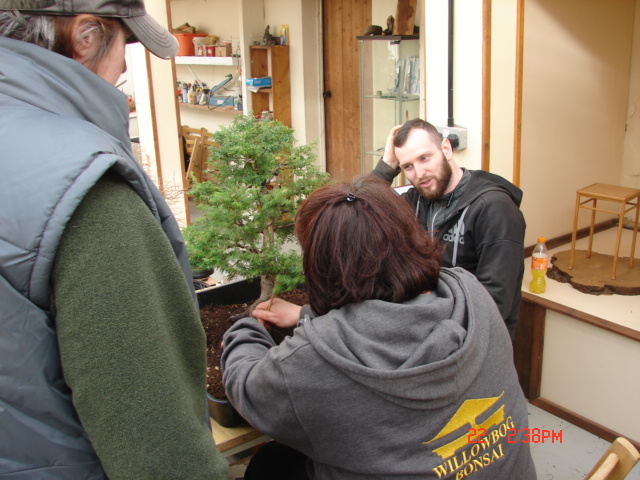 Both of my ”so called” helpers busy just watching Willowbogger Angela working on her Western hemlock re-pot. 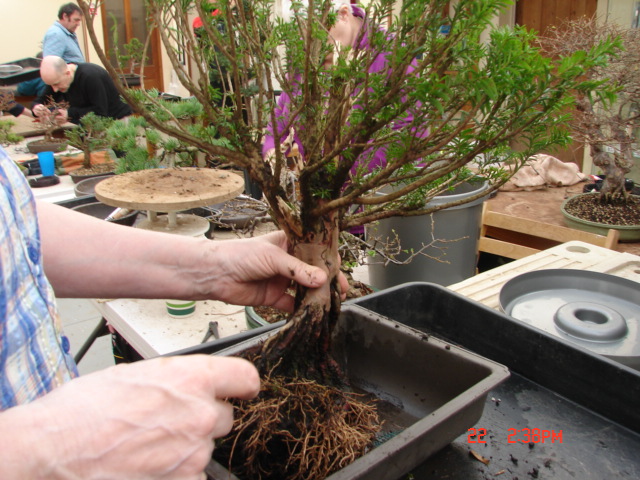 Norma ready to get that yew into a plastic training pot. 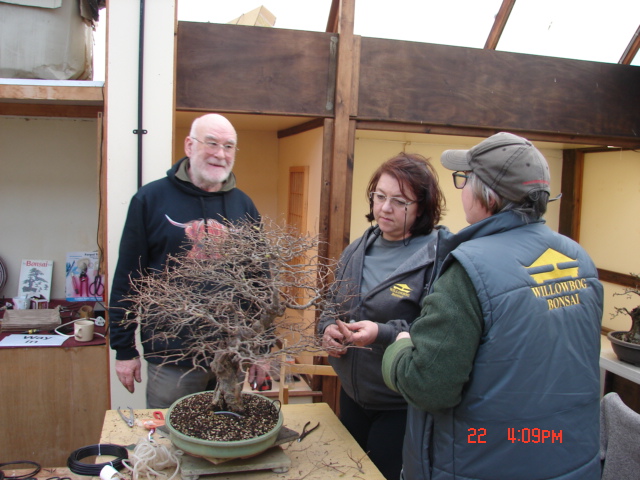 My turn to join Caz in watching Angela at work, but to be fair she just seems to be watching also ! 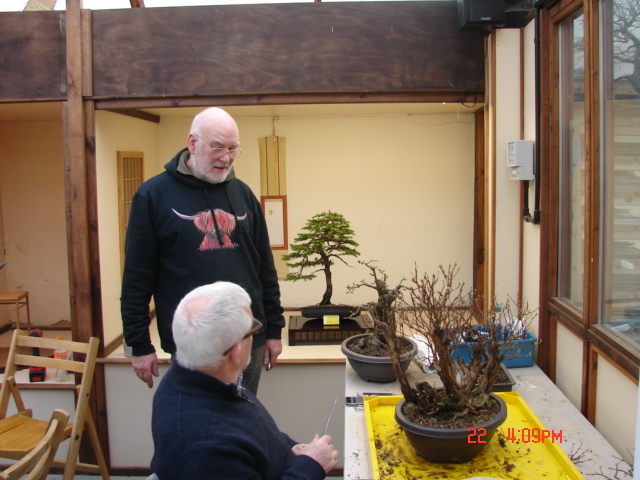 Towards the end of the day and I just chat to Will about his progress with that Potentilla. 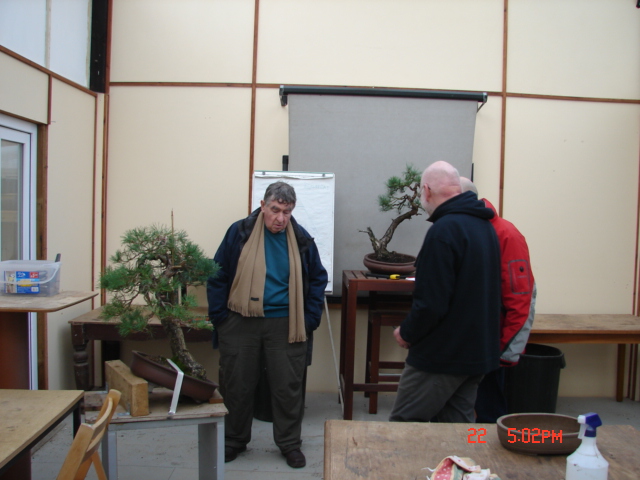 Right at the end of the day and Peter G looks deep in thought about something, bracketed by two of Antony’s Scots pines.

My thanks to all our participants, most of whom didn’t feature in the photographic record of the day, and to Caz and Scott, I think that we all had a busy but enjoyable day, next weekend it’s the Trophy in Belgium, I hope to see some of you there.