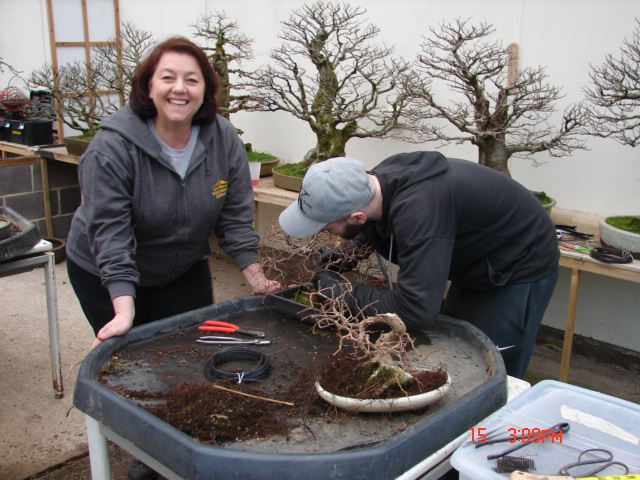 Saturday 15th saw Willowbog Bonsai stage a themed re-potting workshop where we planned that as well as the practical work of actually re-potting bonsai some detailed theory behind the work would be given to those participants that felt they needed it, usual because they were quite new to the hobby. 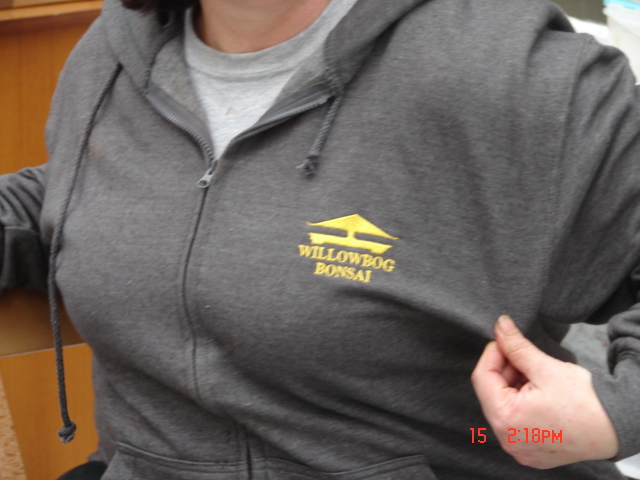 First though Willowbogger Angela shows off one of the new garments with our logo that we have had produced, more on that in a future post. 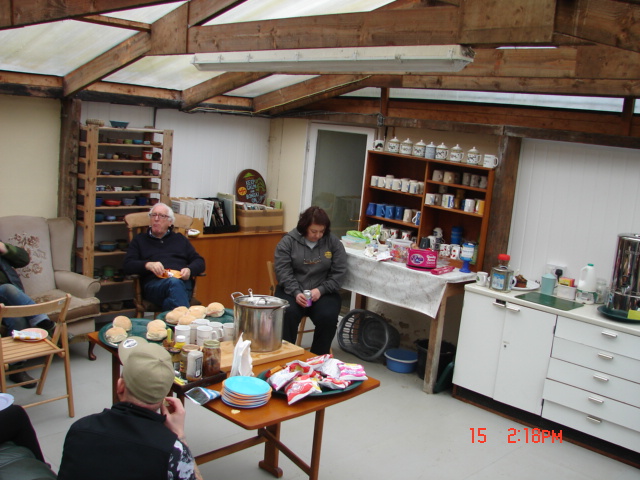 With nine participants the day was busy to say the least and, in part due to that, our photographic record of the day seems to not to begin until the lunch break which, of course, at this time of year featured helpings of Jean’s famous home-made soup. 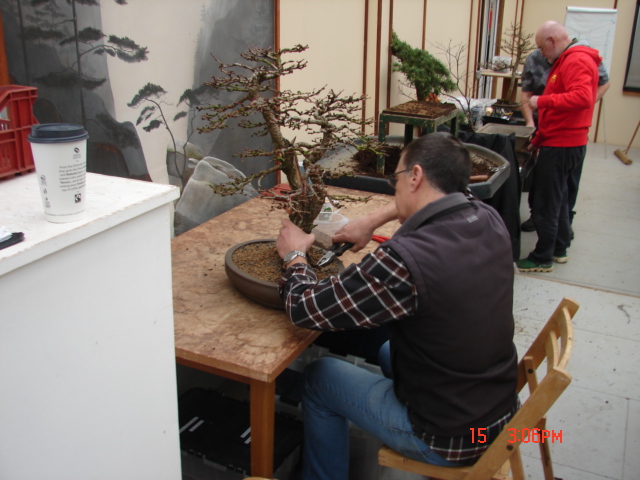 I had spent almost the whole morning with about half our participants on the theory side of re-potting whilst the remaining half had got straight on with some practical work. In this image John B concludes the re-pot of his nice Japanese larch. 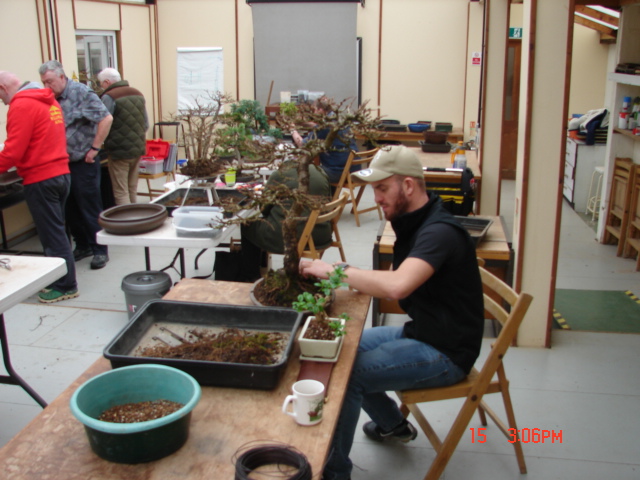 Mick is not only a new face at our workshops but is also quite new to bonsai itself and he took the opportunity on the day to purchase a nice Larch, only his second bonsai, and a good foundation on which to build a collection. Hopefully we will see a lot more of Mick in the future. 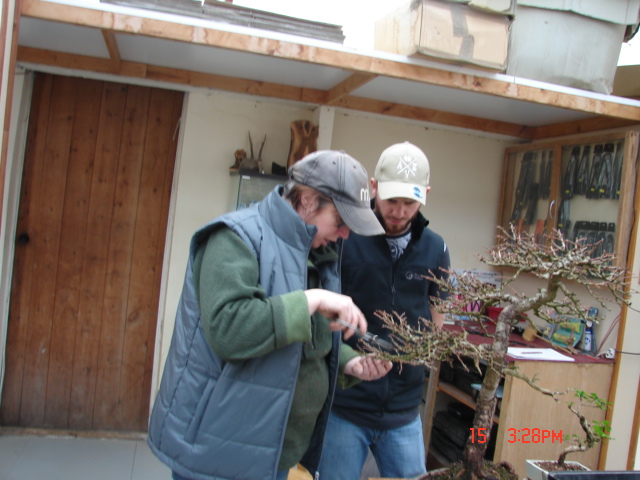 Here Caz takes Mick through a bit of routine pruning on his new larch. 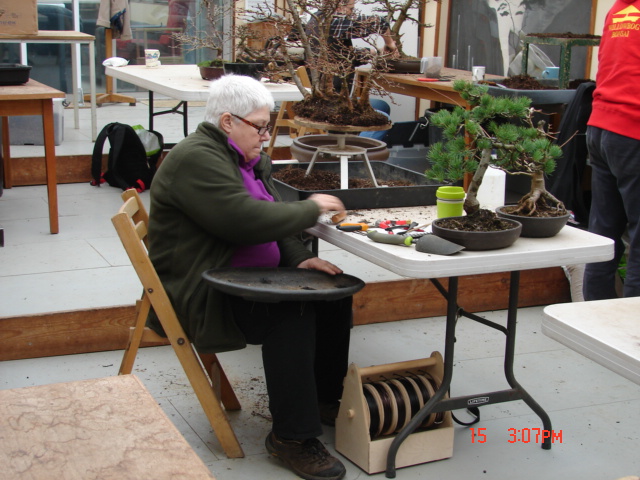 On the other hand Penny is an almost ever present face at our workshops these days. 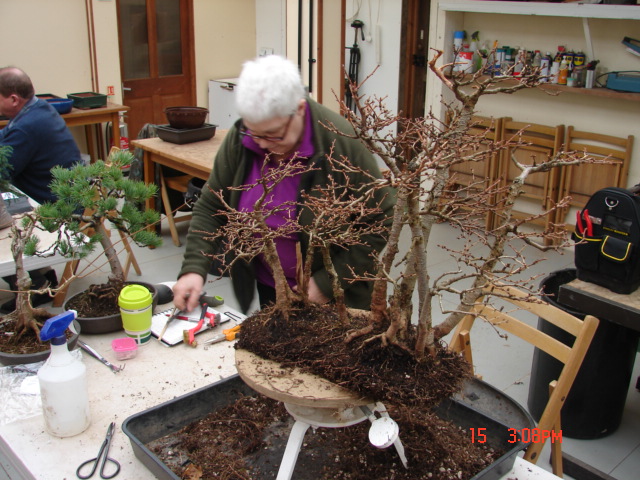 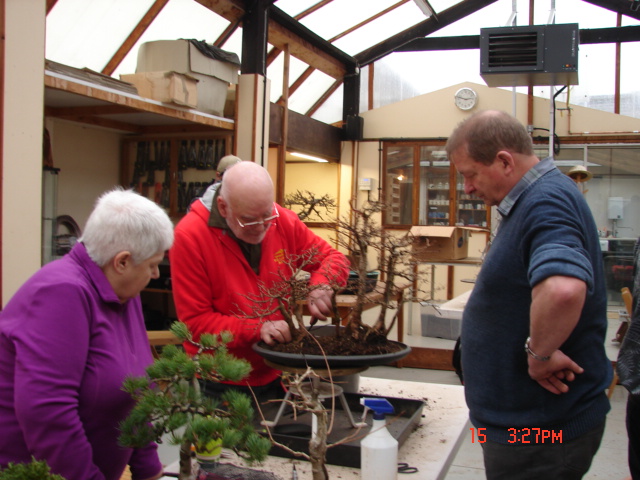 I lent a hand with the final securing of the group into the Mica planting pot with Kevin S standing by watching. Participants are encourage to gain wider knowledge and experience by observing others whilst waiting for work to be done on their own trees. 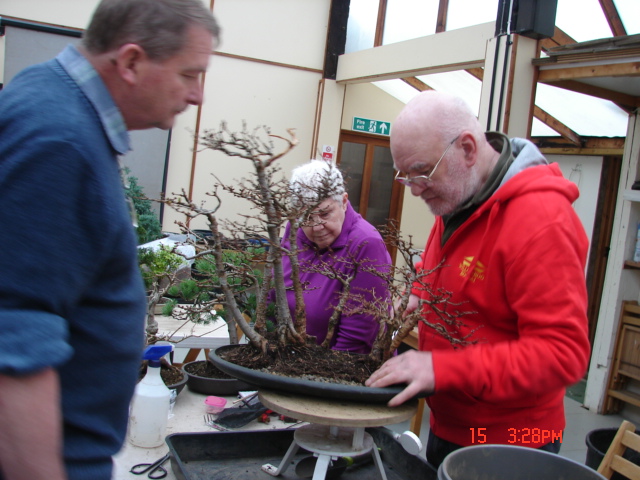 Sporting my own new logo embroidered top I checked as the new growing medium is added. 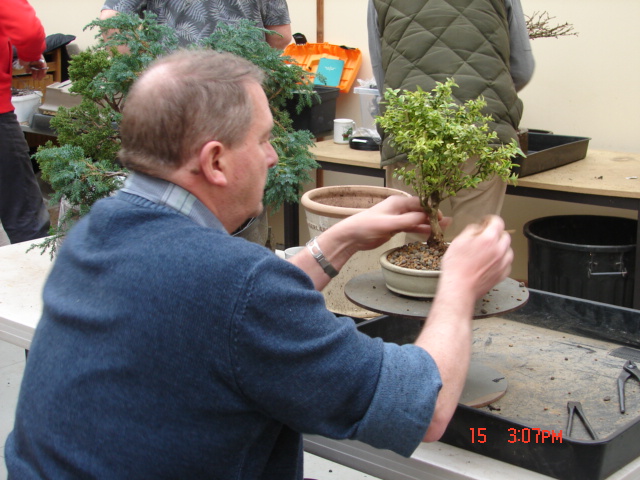 Although quite new to bonsai Kevin S has attended a number of general workshops here but this was his fist experience of re-potting. One of his re-potting projects on Saturday was a potentially interesting shohin size Box that was planted in a nice Walsall Ceramic oval pot. 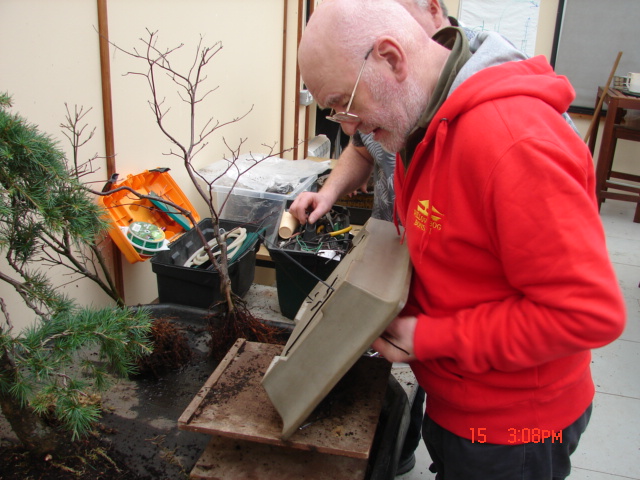 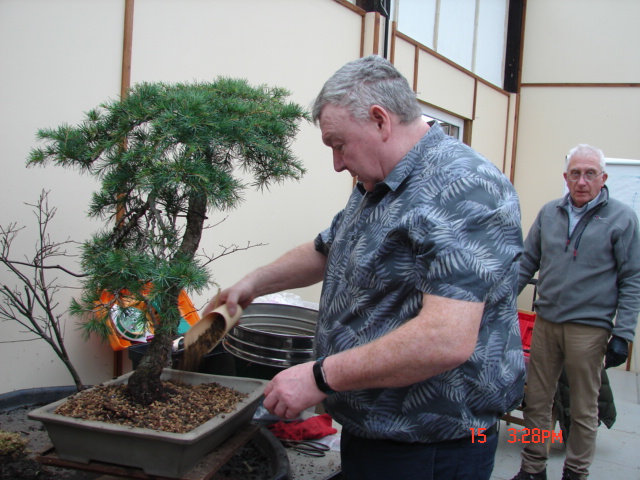 This was only Terry’s second workshop with us. We are looking forward to helping him with the styling of his tree when it is recovered from the re-pot. Frank in the background waiting for a bit of help with one of his two  trees that were dealt with on the day. 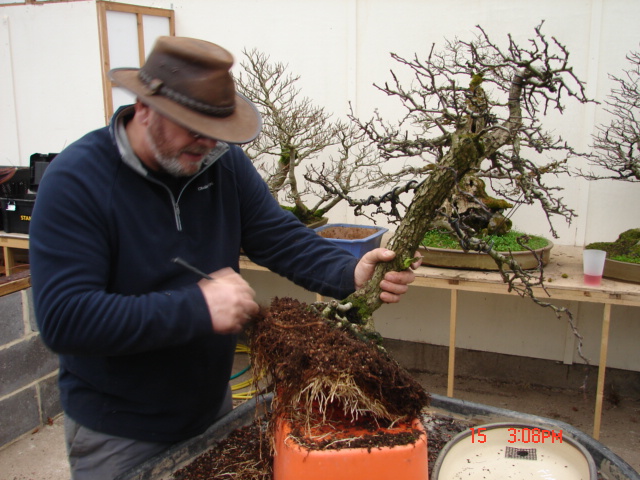 Paul B. worked away all day getting a number of trees into new pots. A lot of nice healthy root on that Hawthorn Paul. 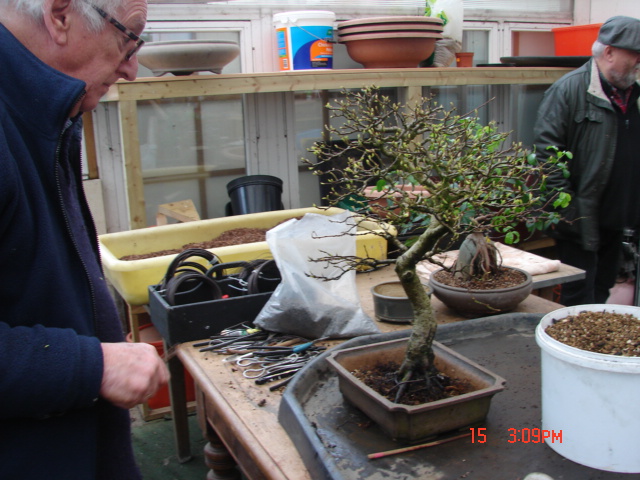 Also working diligently all day in the new greenhouse was David C. who got several bonsai attended to.

Here’s a lovely smiling face that I never get tired of seeing. Angela sensibly lets Scott do some of the work on one of her bonsai. 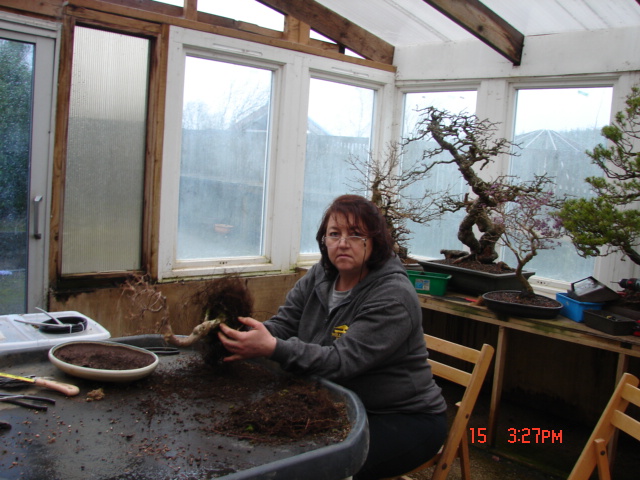 Goodness me !  a much more serious face now, is she not happy with the roots on her tree?  or is it because now Scott is behind the camera in stead of getting on with Angela’s trees ? 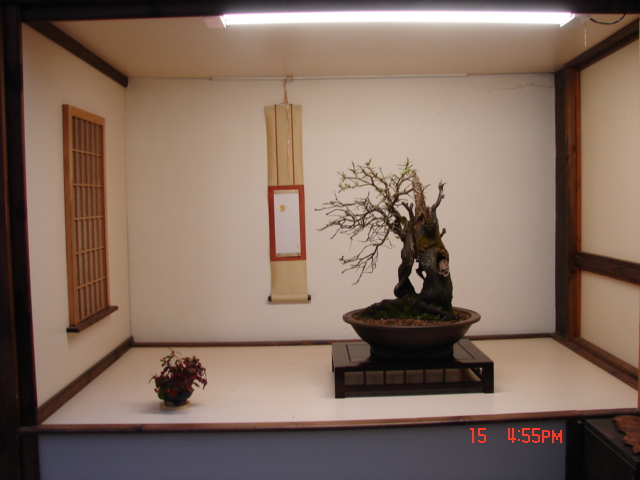 The studio tokonoma for the day. 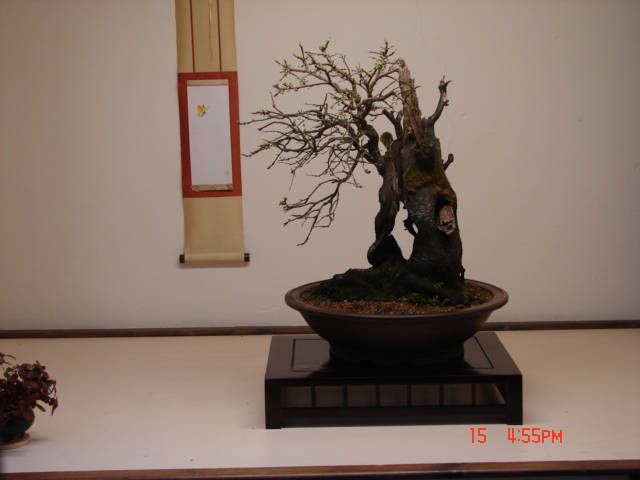 The featured bonsai is the Prunus from The Willowbog Collection, soon to be in flower by the look of it. 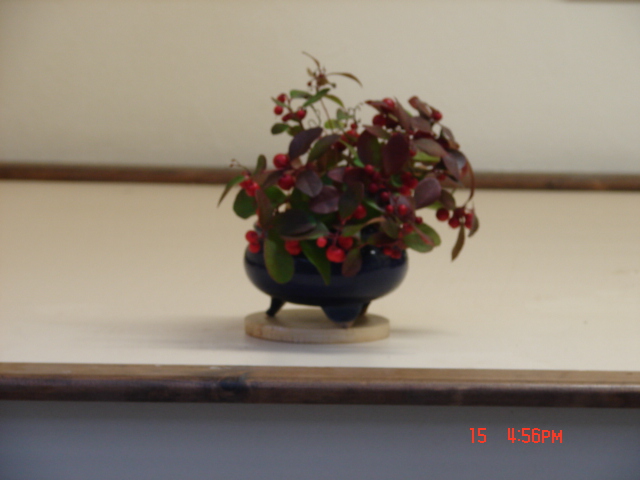 The accent was this little red berried thing, Caz knew it’s name but I cannot remember. 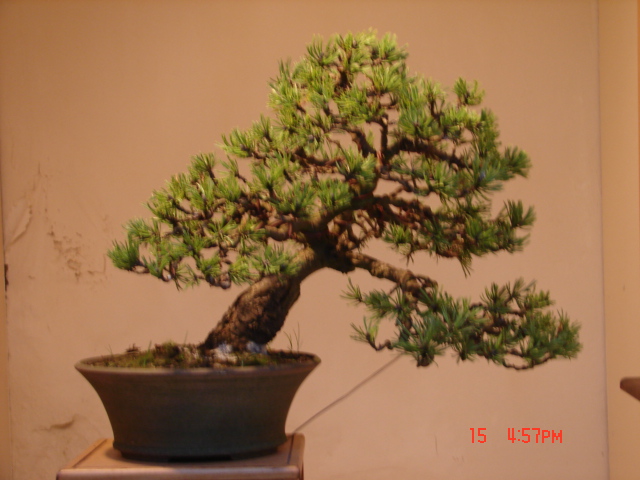 In the side alcove a not particularly good photo of this chuhin Mugo pine that Caz styled for us a while back.

So a long and busy workshop day came to an end well after five pm. My special thanks to Caz and to Scott for their invaluable assistance, to all the participants and lastly a special thanks to Angela for the whole process of getting the new Willowbog Bonsai logo applied garments supplied, it wouldn’t have happened without you.  A general workshop next Saturday, the 22nd, and already a good number booked in so it will be busy again.