One of the best ! 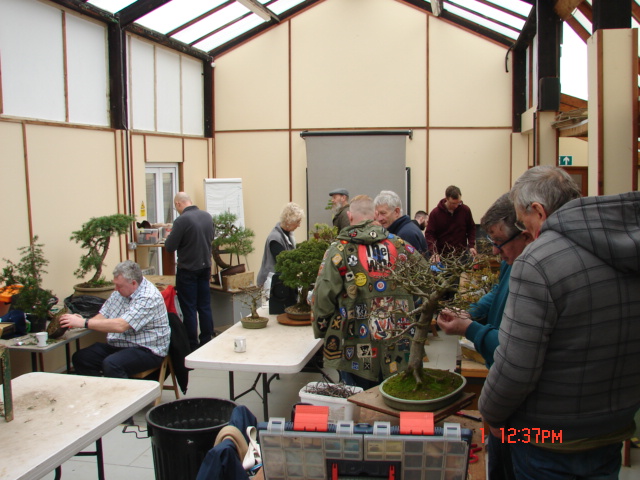 How encouraging it was for us to see that our second community day of this new year was one of the best in terms of turn out. 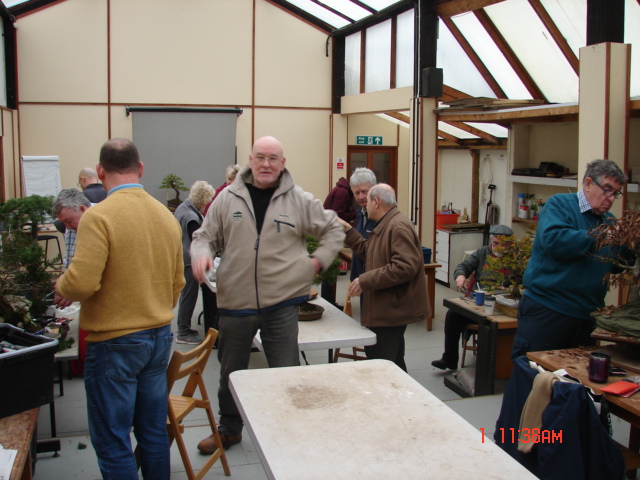 Nobody can quite remember when it was that we initiated our Bonsai Chat days here at Willowbog Bonsai but it was certainly a lot of years ago. 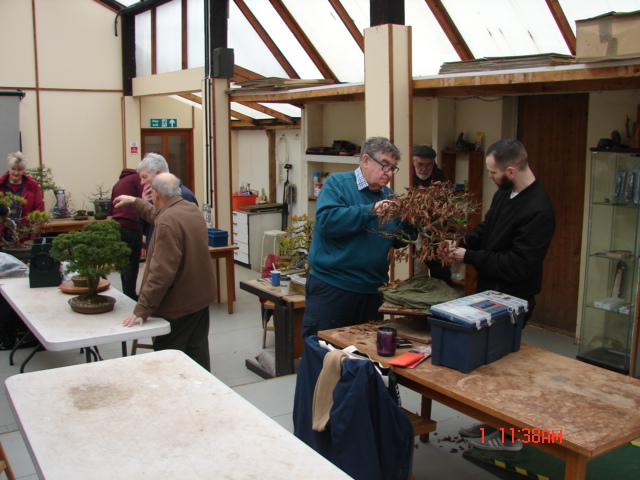 The first Saturday in each month is given over to this free day where enthusiasts can meet and make use of the facilities here at the nursery. 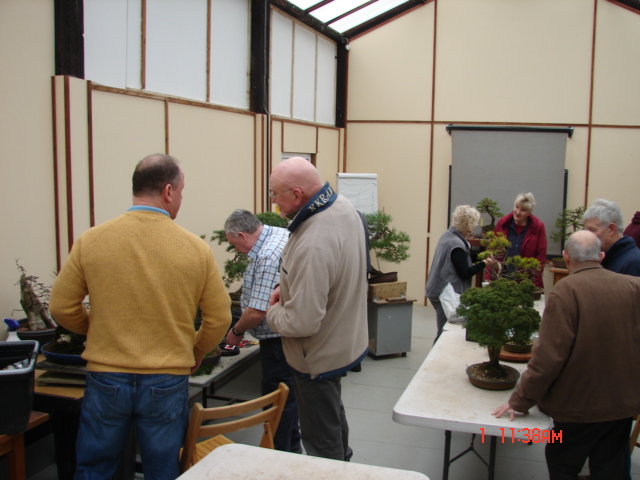 None of these photos will quite give a sense of the numbers on the day with some folk walking around looking at bonsai in various locations whilst others who have brought trees along get on with some work. 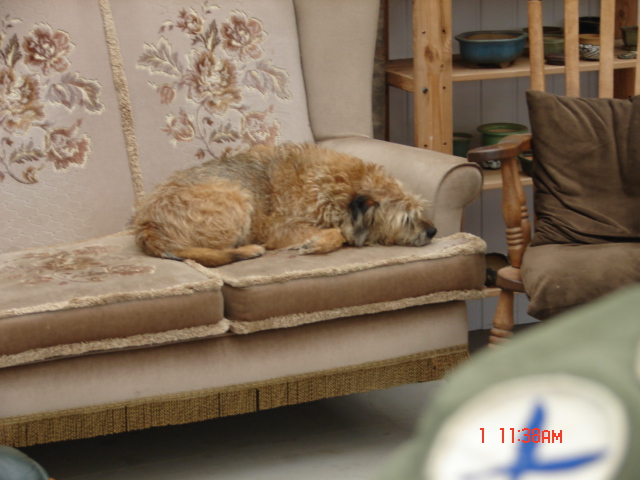 Of course not all are busy looking at or working on trees,  here we see Tyke clearly happily settled on his favourite sofa in the refreshment room patiently waiting for Jean to bring out the snack lunch which he will expect to be shared with him by various soft touch participants, of which I am certainly one ! 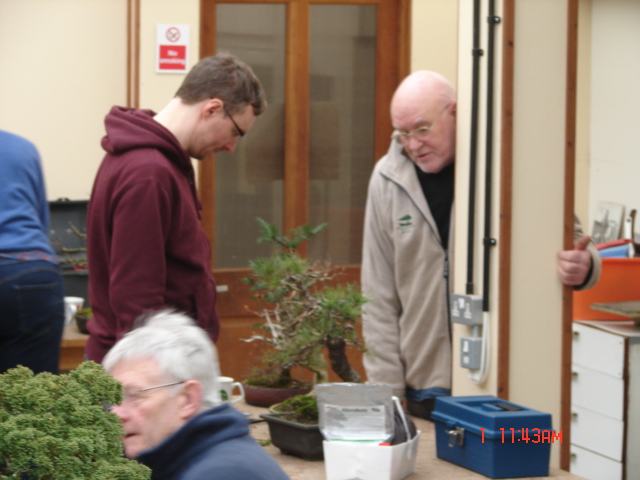 There was plenty of tree work going on in the main studio area though before lunch. 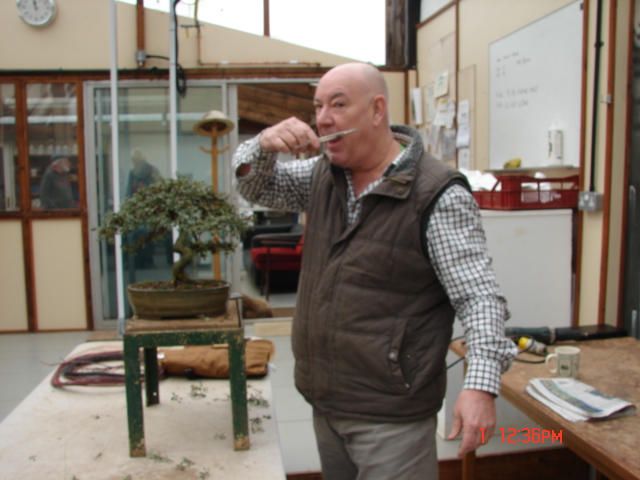 I am assuming that in this shot Terry D. is catching up on a bit of personal grooming in between working on his Cotoneaster, unless, of course, there is a biscuit cunningly hidden behind those shears. 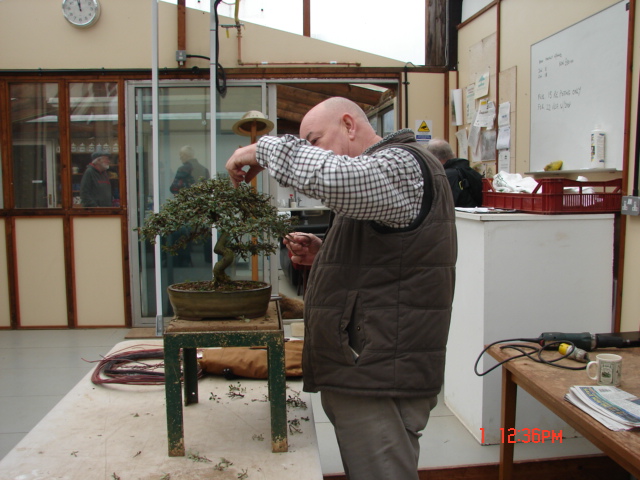 Then on with the pruning. 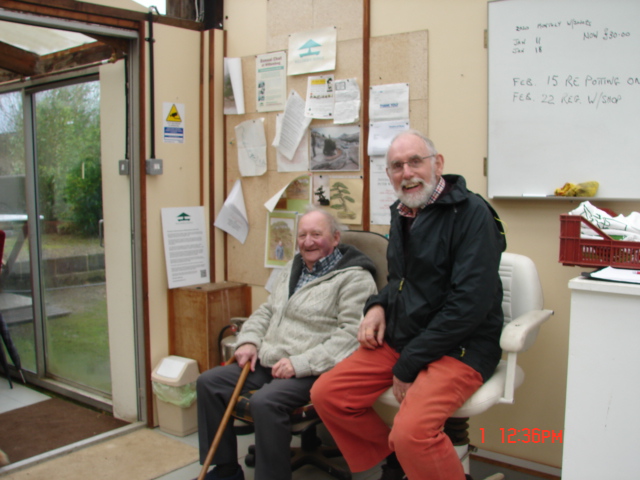 Great to see such a full and busy studio. 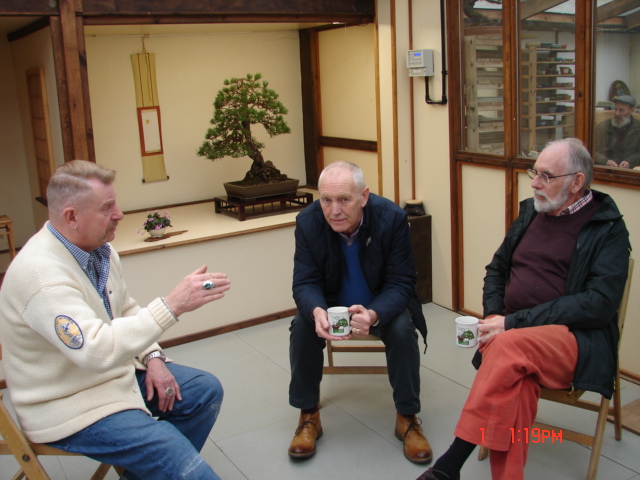 Malcolm gives Mike and John the benefit of his wisdom, pity that I missed out on that ! 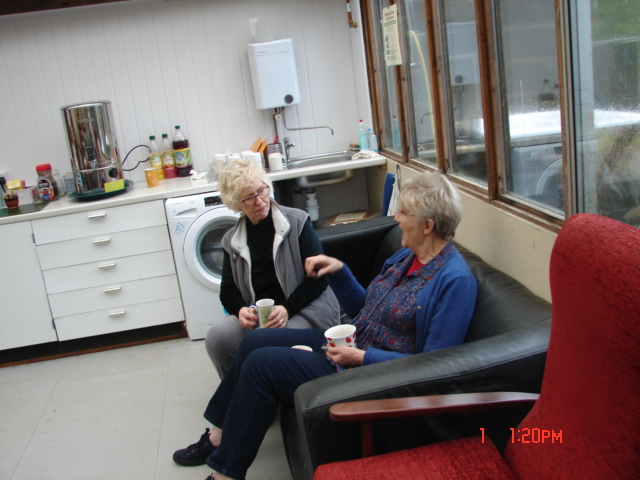 And let’s us have no sexist comments about what ladies do best , Diane and Christine were almost certainly discussing the merits of one bonsai topic or another. 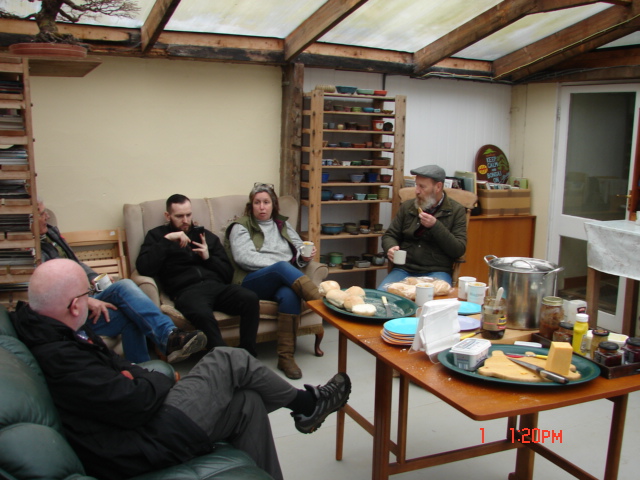 Feeding time at the zoo !! 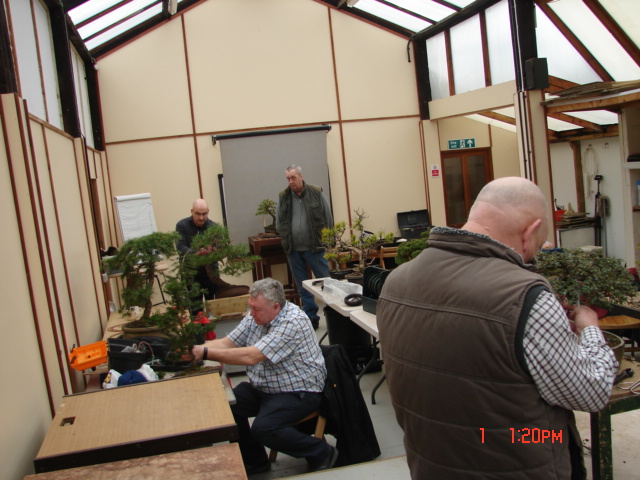 Some folk did not seem to have time to stop to eat, such dedication very impressive I may say. 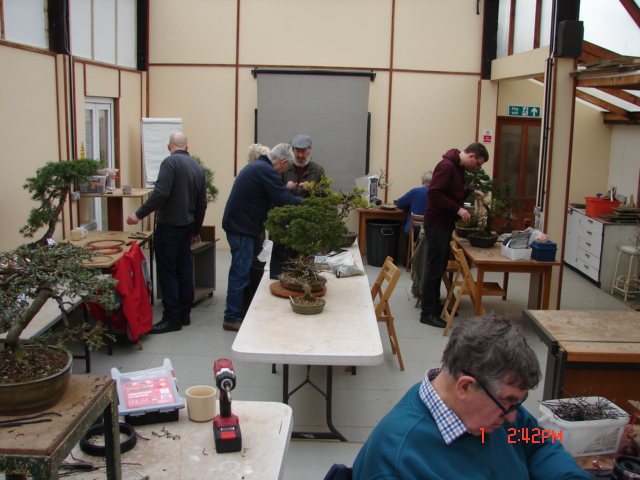 It is always interesting for me to see the wide range of material being worked on days like this. In the foreground The G-man may appear to be sleeping but I am sure he was concentrating really hard……………… probably on the rugby on the radio ! 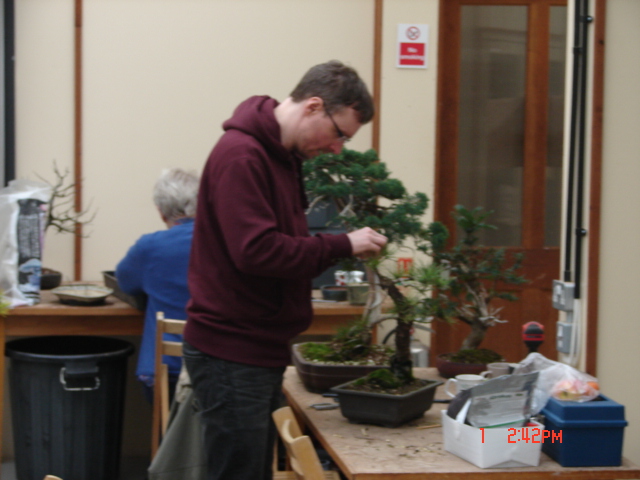 Sam kept himself busy all day. 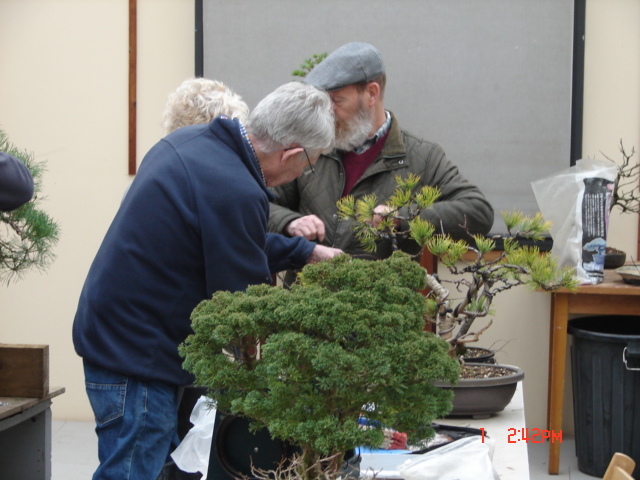 John H. is always busy all day at each ‘ Chat ” Nice to see Mr. Holmes back with us, he has been missing for a while. 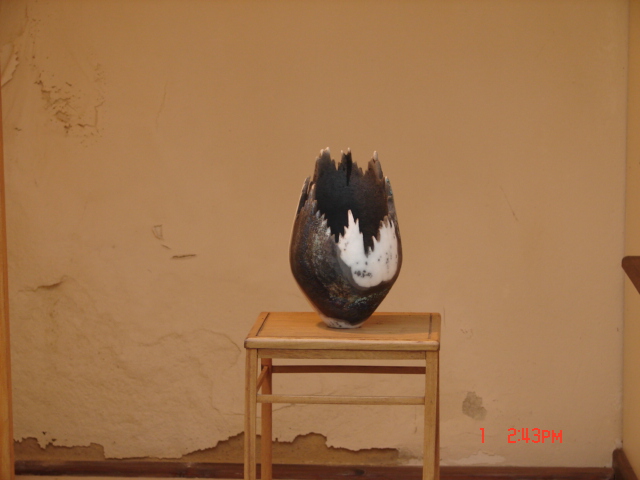 A nice ceramic vase from Jean’s collection featured in the day’s tokonoma. 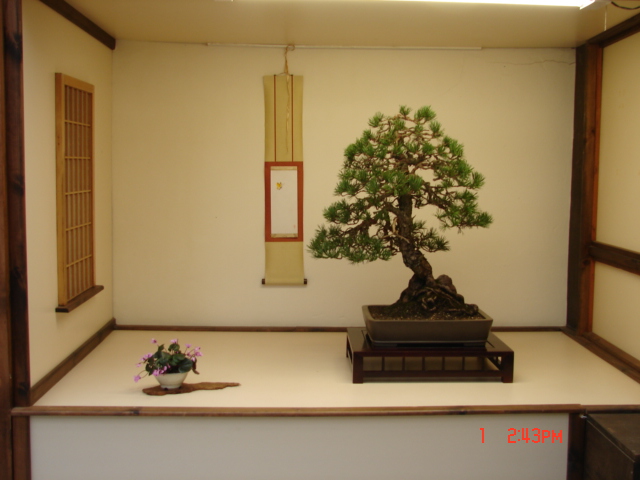 As did this really old Scots pine bonsai which is an example of Caz’s excellent styling work on Willowbog sale trees. 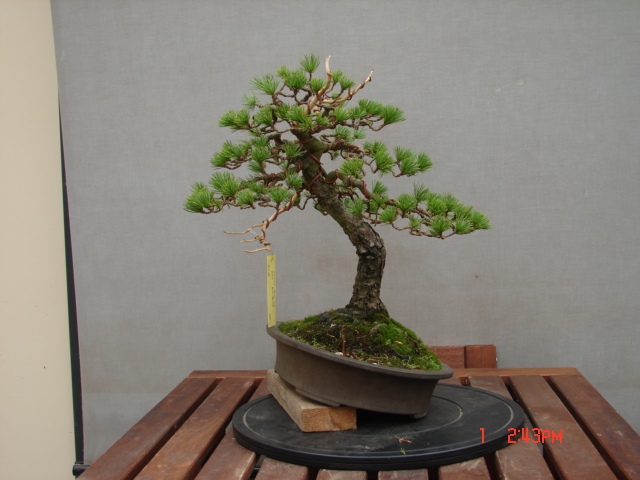 This chuhin Japanese white pine is the most recent example of the great work that Caz can produce. 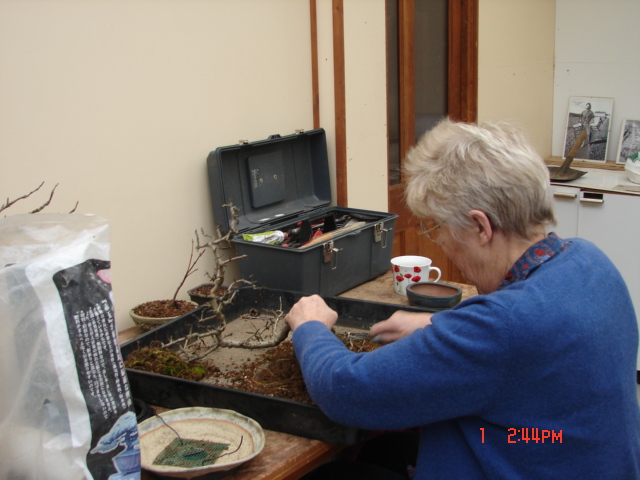 The day drawing on but finding Diane still hard at work on more re-potting . 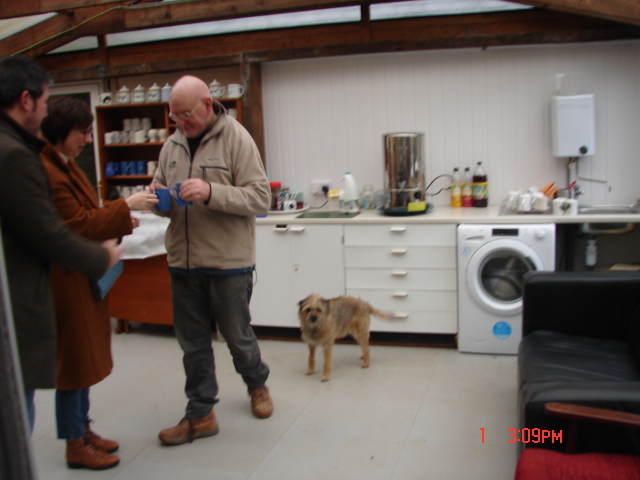 I nearly didn’t include this as it is photographic evidence that I am actually capable of making some tea, in this instancve for a young couple who had braved the inclement weather to make their first visit to the nursery, regulars should note that my wildly generous gesture will not be repeated for their benefit !!! 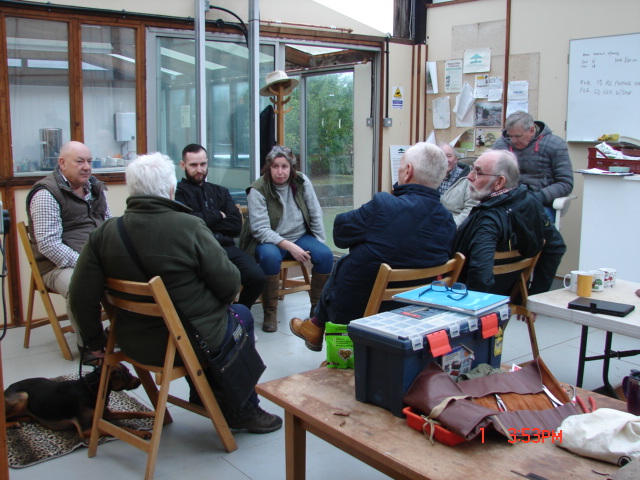 Look at this motley crew, do that not have homes to go to ?  we close in seven minutes time !

Thanks to mainly Caz I think for the pictures and to all the participants including the many that were not recorded on film,  it was a brilliant day. An event free weekend next, two more workshop Saturdays follow then the Trophy in Belgium, which will bring us round to the March ” Chat”  why not join us for that ?