It all begins again ! 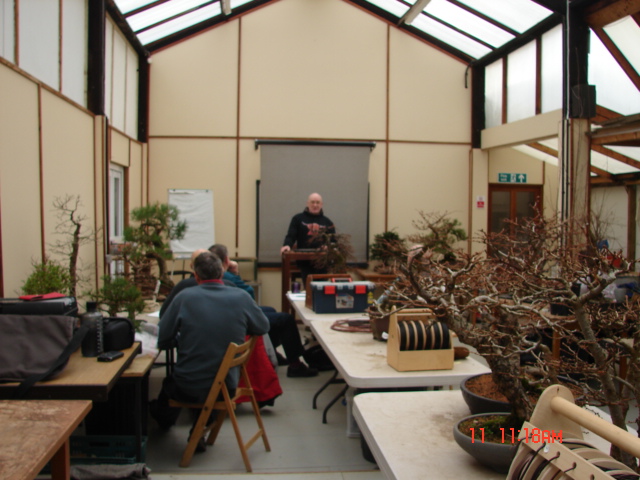 Last Saturday, January 11th. we began our 2020 programme of workshops here at Willowbog Bonsai. Following increased demand we are trialling two general workshops each month where we can fit them in and this was the first of the January dates.

There were seven participants and they were all very familiar faces,  that’s why this photo shows their backs ! 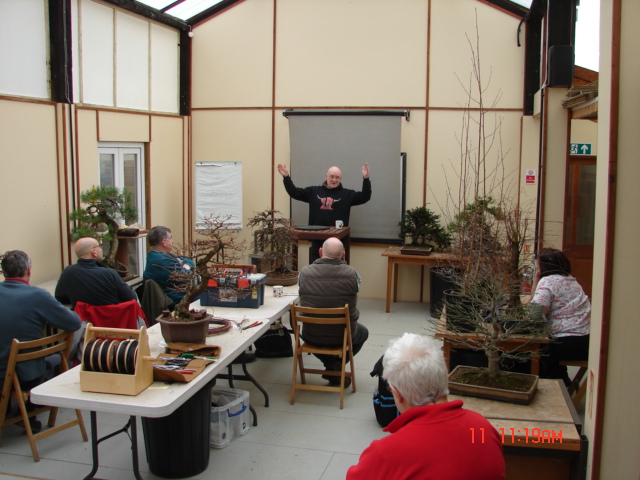 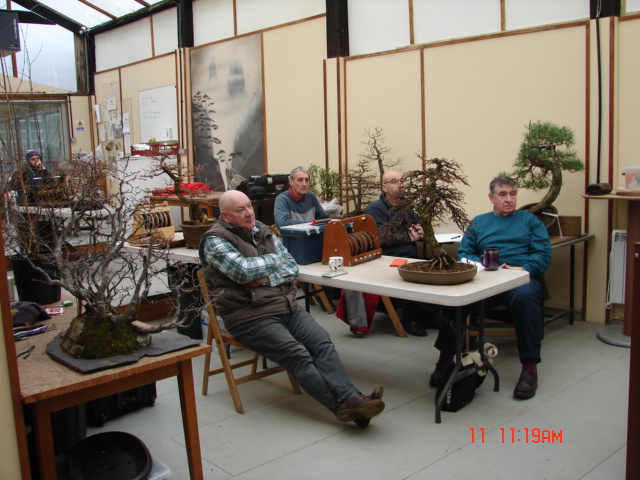 As at last month’s workshop the main theme of the initial discussion period was the weather, essentially the vary variable nature of it and the effects upon our bonsai. A conclusion was that there was a strong possibility of an early start to the new growing season and that we needed to be well prepared for that. 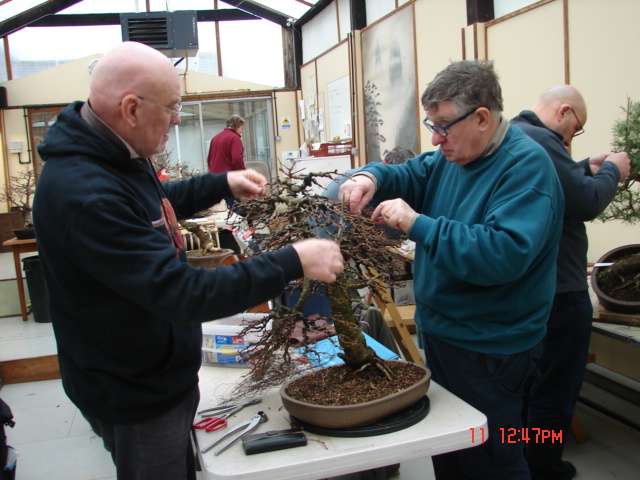 Eventually we got down to some practical work, here looking at the G-man’s nicely progressing Japanese larch. 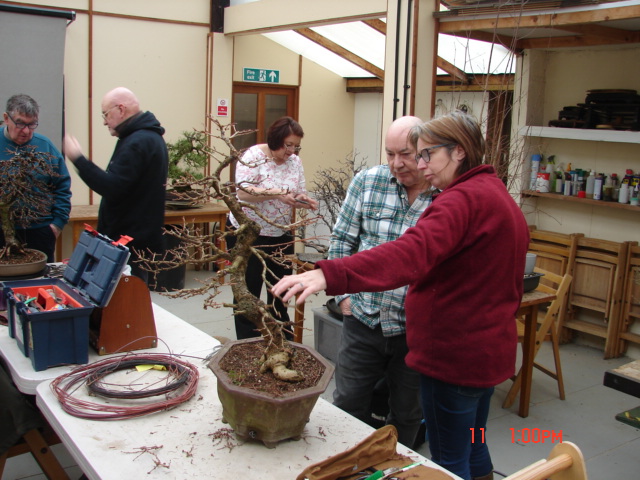 Terry also worked on a larch and Caz talks him through some options. 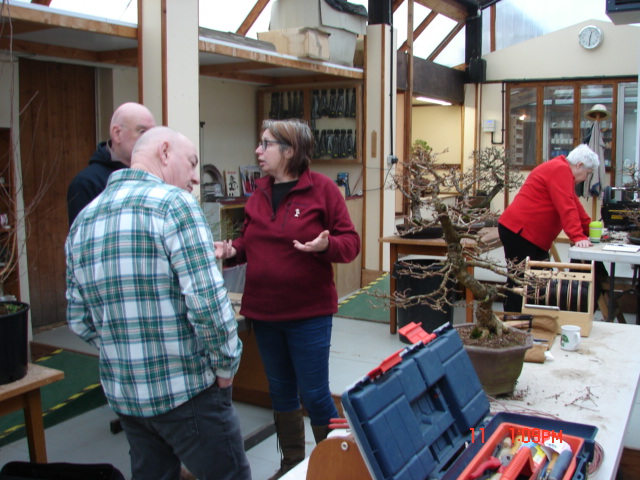 Then I got to put in my view, which were quite sensibly mostly ignored ! 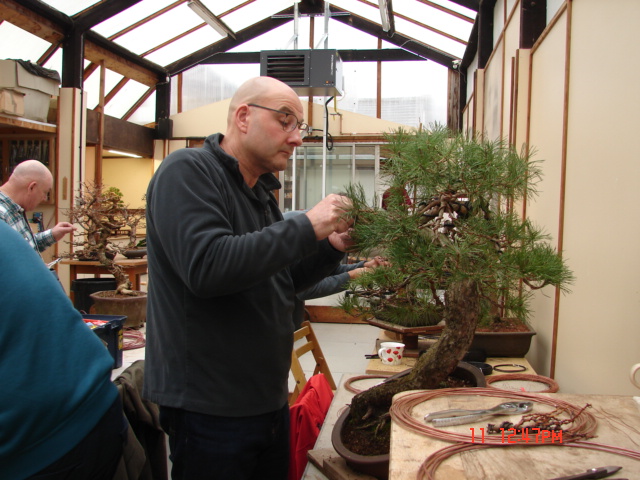 Antony feels that he has been wiring his Scots pine since the dawn of time, however, I am sure that he is getting nearer to the top of the tree,,,,,,,,  maybe ?  Much better to do a good steady job than a hurried poor job,  that could be a bonsai maxim ! 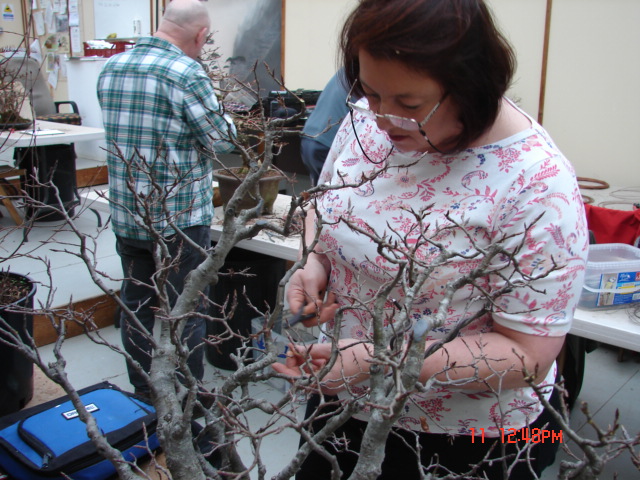 This is a good time to look at structural pruning on deciduous trees and Angela eliminates some heavy top twigs on her lovely multi-stem Beech. 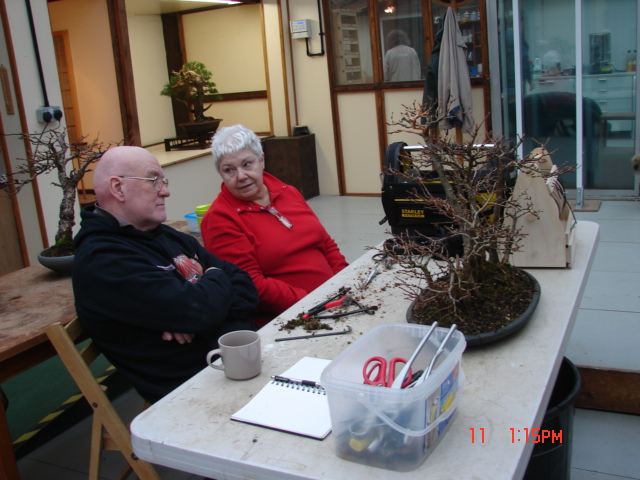 Penny and myself look at her Larch forest planting. 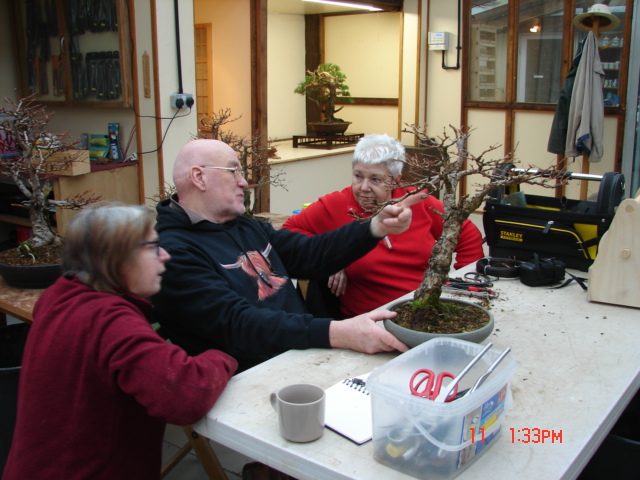 With another of Penny’s larch we invite Caz to give a view, then it is her turn to get ignored !!!  Not true actually we went ahead and did what Caz suggested. 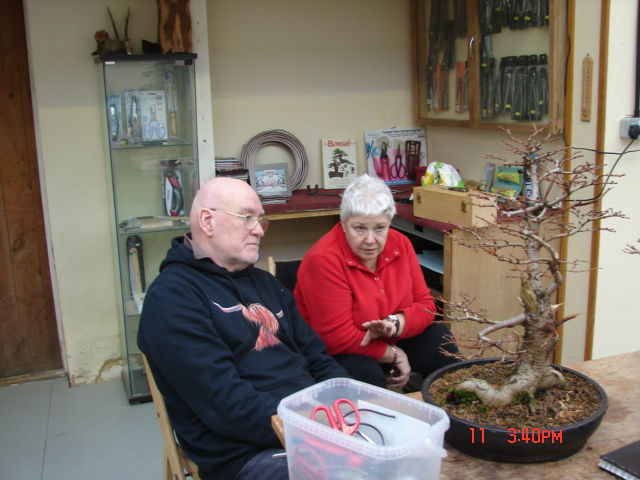 Yet another of Penny’s larch to assess and she has her own views for me to ignore !  Again not true of course. 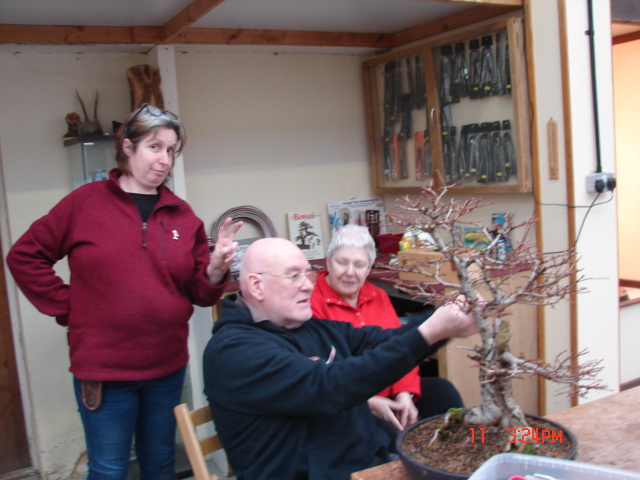 Although Caz seems to be making some sort of point in this photo !! 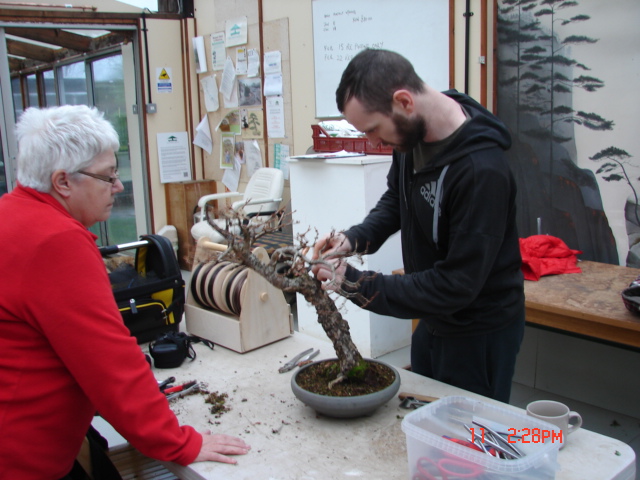 Scott gets assigned a little deadwood work to carry out. 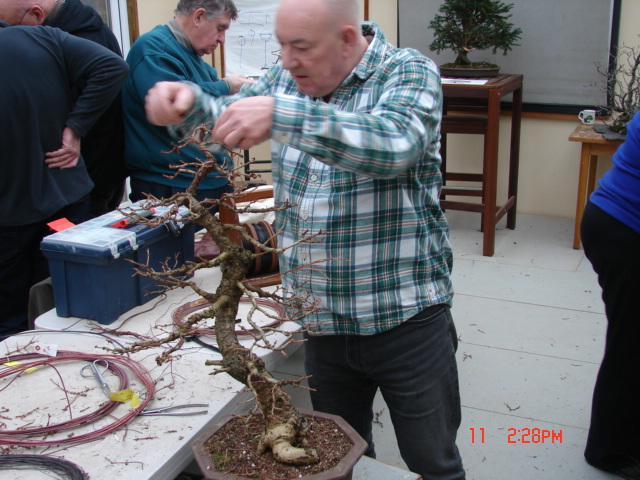 Terry working away on his larch. 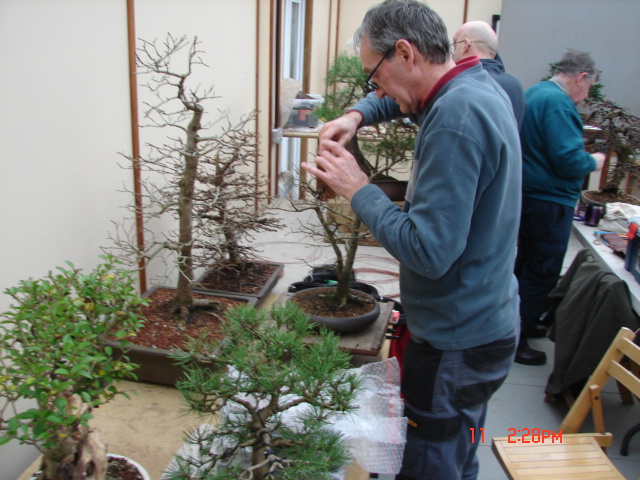 Kevin getting some pruning done on a nice little Elm. 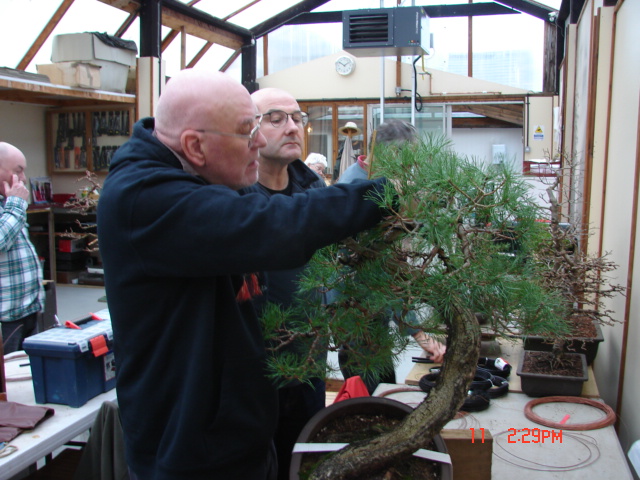 I helped Antony get some wire on a tricky little branch,  we can see that it is near the top of the tree !!! hurrah ! 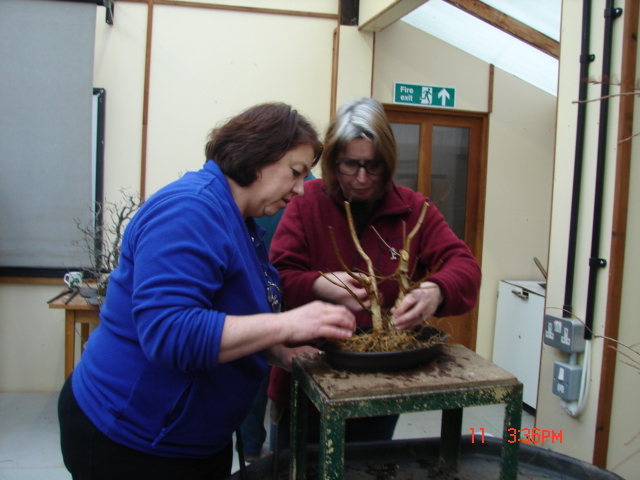 Caz helps Angela repot a little nursery stock birch, something for the future. 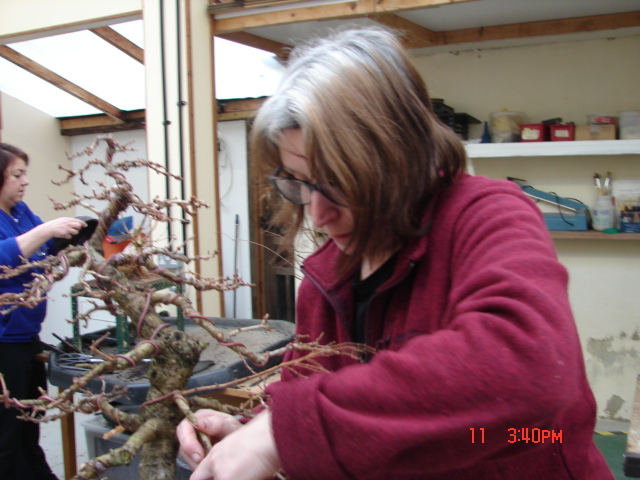 A good shot of Caz shaping branches on Terry’s larch.

Thanks to all the participants and to Caz and Scott for their help and Scott for also thinking to pick the camera up to record most of the day, we do it again next Saturday !!  Hey, I’m supposed to be semi retired and my advanced age.