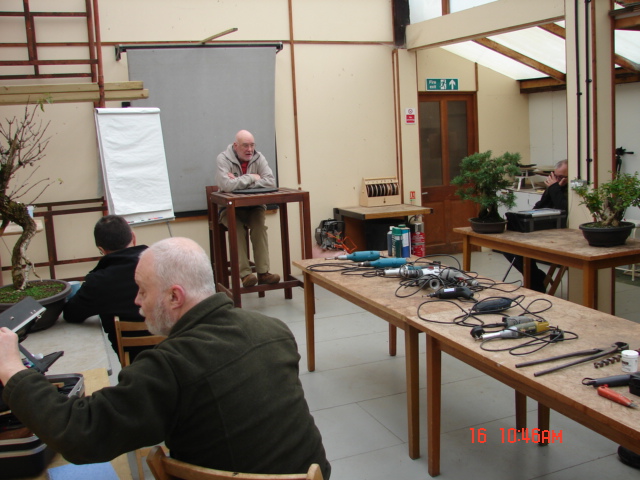 Last Saturday four more participants joined us for a look at the use of deadwood in bonsai creation.  Almost certainly this was the last day in which we focus on this topic until the new year.

On the basis that ”if it’s not broken then don’t fix it”  we started with a general discussion on the topic and the various ways it might be used and purposes that deadwood features have, where appropriate and where not. 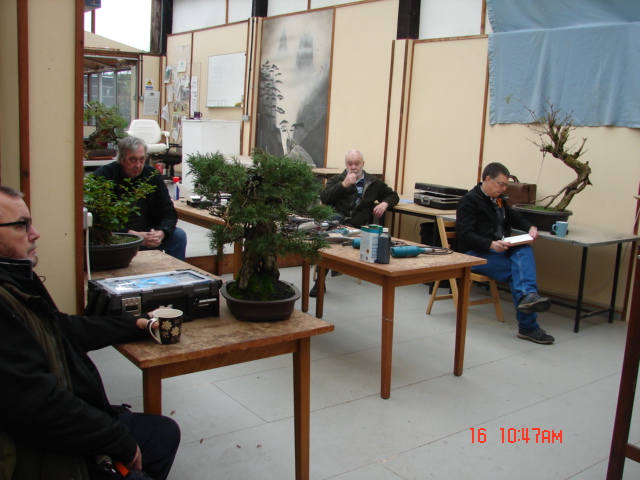 It is our view here at Willowbog Bonsai that it is not enough to just get to grips with the techniques but that a proper understanding of their application and, importantly, their effects on the tree concerned, is conveyed to the day’s participants. 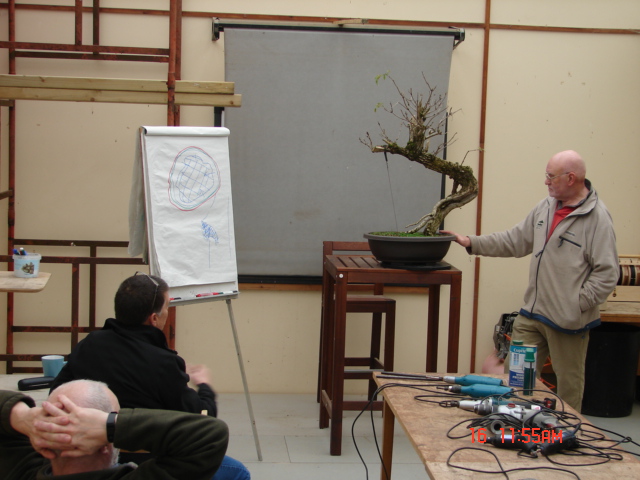 We then took a quick look at some of the trees brought along and the possible problems arising from their use as bonsai. Being discussed is an unusual bonsai subject and one in which the growth habit presents a number of problems. It is Sambucus nigra or Common elder. This example was collected by the owner John and has enough interesting features to make it worth looking seriously at ways to end up with a pleasing and appropriate image. I liked it a lot ! 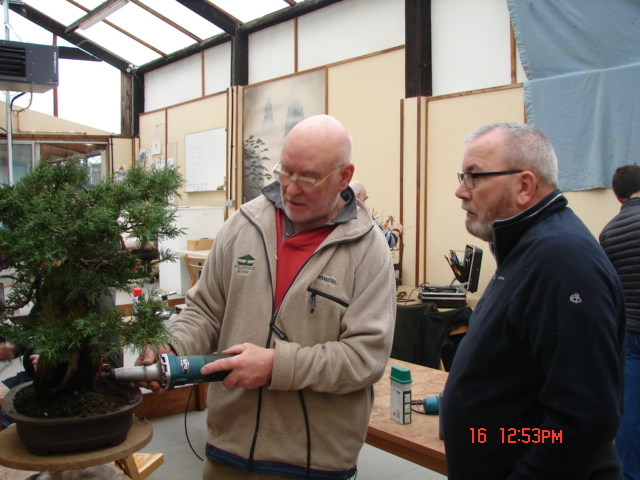 Paul brought along a Juniper that is well on the way to being bonsai, created originally from garden origin material, a previous owner had done extensive carving that required a bit of refinements and altering. 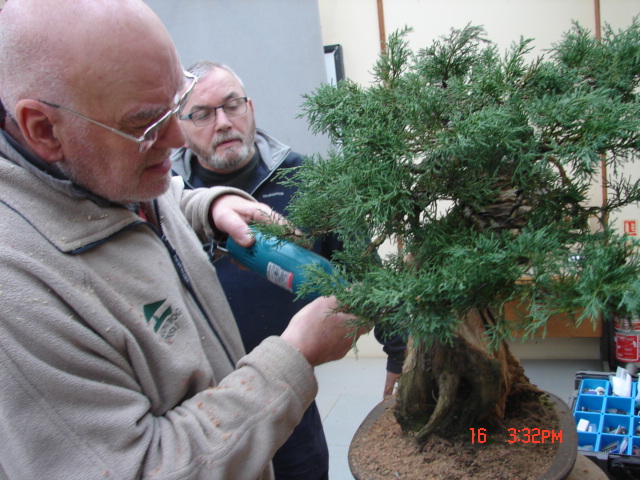 I will admit that I find it quite difficult to alter someone else’s carving, however, Paul seemed happy that we made progress on the day. 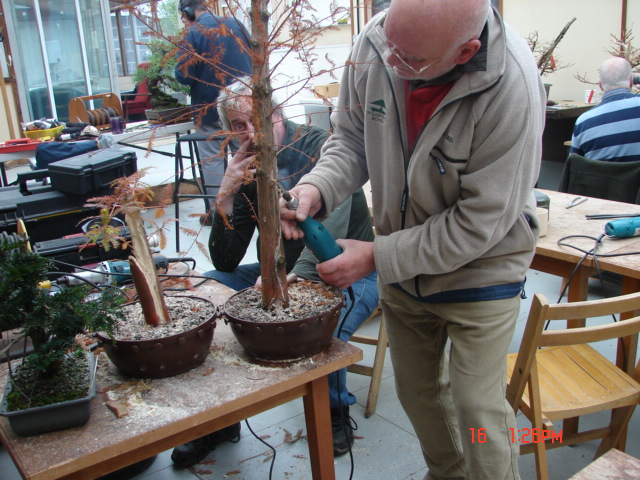 David had a couple of Dawn redwood bits of field grown material that he had clear ideas about but that involved major height reduction so as to make the beautiful barking colouration more of a feature. Lot of branch growth now required. I am sure everyone reading this has the species latin name tripping of their tongue, no ?   surely you recall, Metasequoia glyptostroboides the species has a remarkable history, look it up sometime. 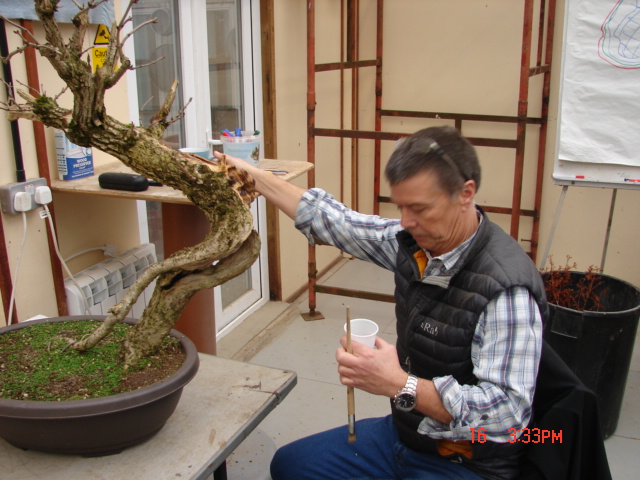 Don’t drink it John, it is a proprietary clear preservative for treating the deadwood on his Elder. 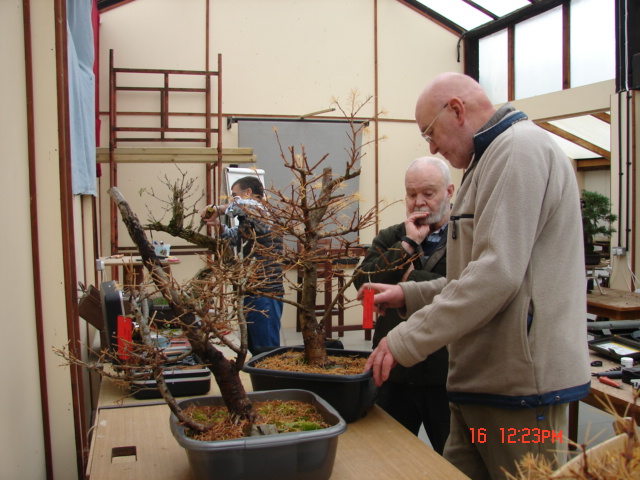 Ken, looking on in this image, participated despite not having a tree needing working on. He is pretty new to bonsai and his prime intention was to understand more of this topic.  We got some Larch raw material in off the benches and Scott took Ken through the process of creating rudimentary deadwood on elements that I decided would not be used when the branches were eventually shaped. It got his a hands on experience with some of the tools needed.  Scott not only provided a valuable assist in this respect but also snapped all these photos, thanks Scott. 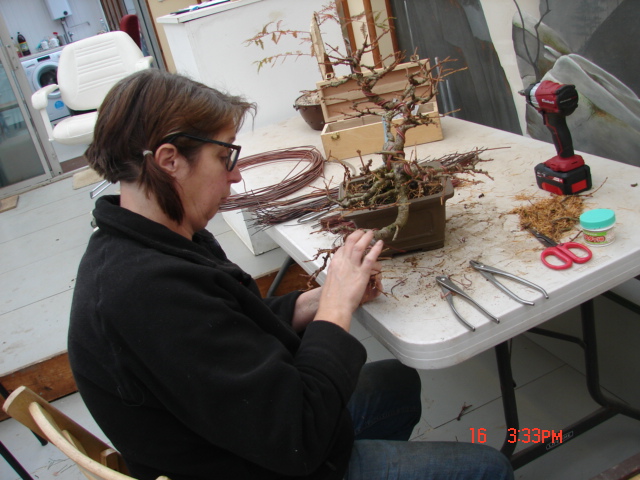 Caz eventually got rained off her outdoor task for the day so spent the remaining time preparing a bit of Larch part styled material for a further shaping.

So another good day with four keen folk covering a valuable design aspect to bonsai, normal monthly workshop next Saturday, it’s all go you know !!!