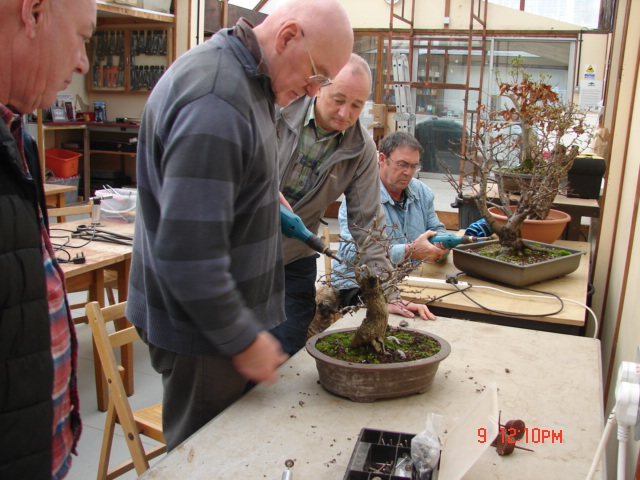 Last Saturday Willowbog Bonsai staged the second of three closely scheduled Carving workshops and four more participants were able to turn some of their bonsai into plies of sawdust.

There was a certain similarity in all of the trees brought along in that they all exhibited either large or smallish pruning scars that required some sort of ” naturalisation ” for a convincing bonsai image to be achieved from the tree as a whole. 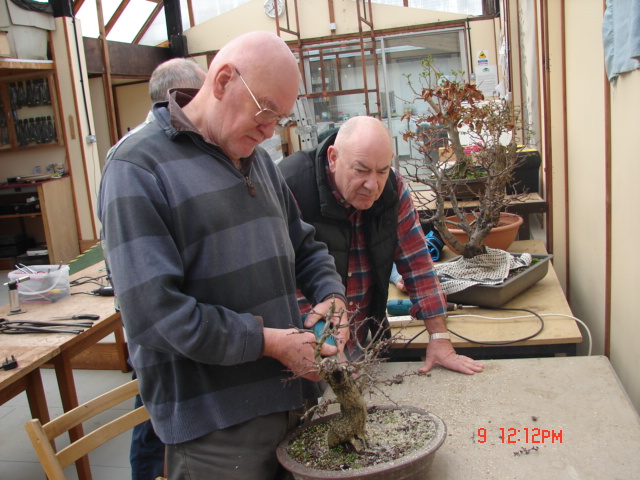 The owner Terry, watches closely with an understandably concerned look on his face as the Makita cutter strays very close to useful branches at the top of his Hawthorn. We actually only needed to remove one to allow the carved area to look like a convincing natural break with subsequent internal decay forming a hollow. 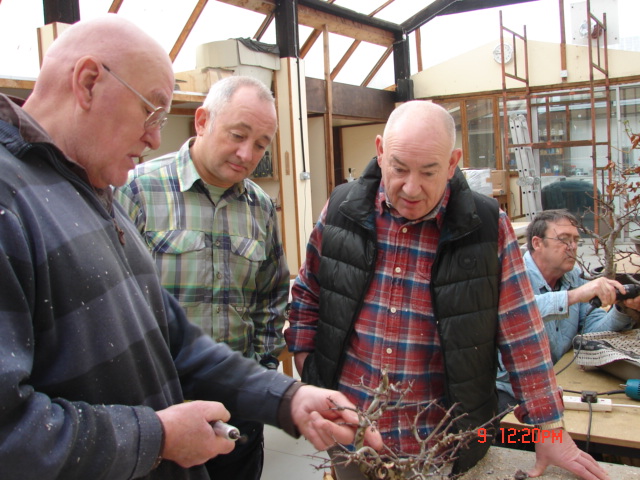 As always it is good to only do the initial removal of wood before allowing the participant to further refine the area, either with a smaller tool such as a Dremel or hand tools. Terry in fact spent some time using both approaches and ended the day with a pleasing result, just more branches to grow now ! 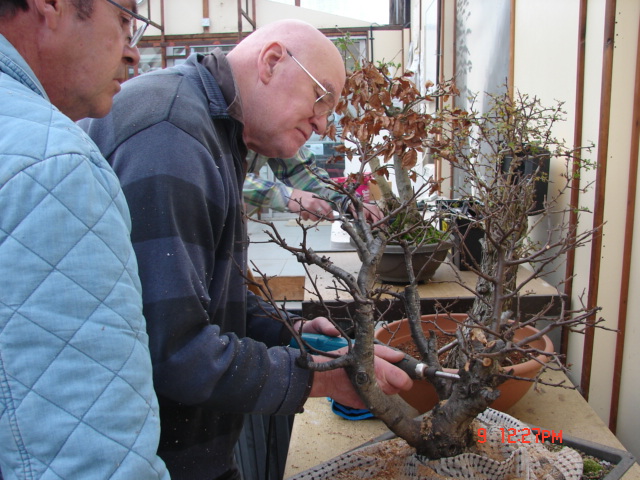 Nest up is Darren’s Birch requiring very similar treatment although mostly on a series of small pruning scars. Again I removed the bulk of the wood and allowed the owner to further refine the areas. 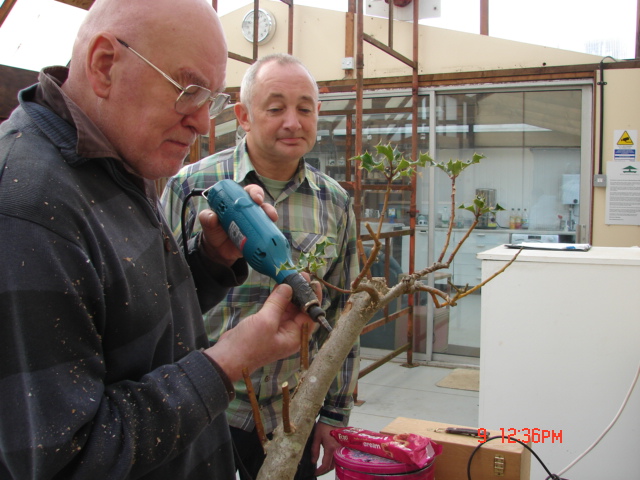 A challenging piece of raw material in the shape of Ian’s Holly. Just one main pruning cut at the top of the trunk to deal with. 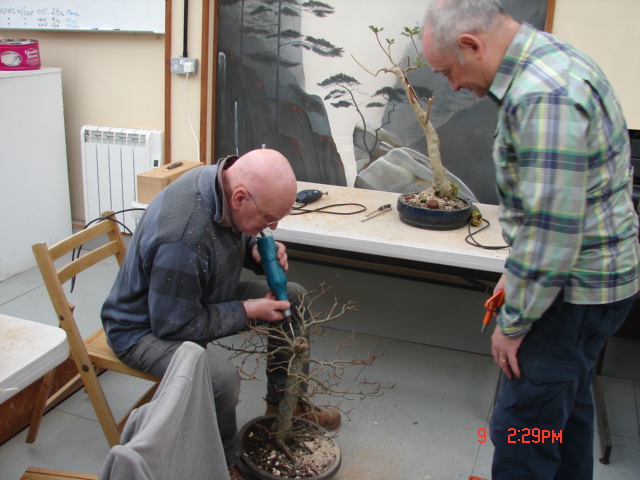 Ian’s second tree was a nice Beech which was someway down the bonsai path despite exhibiting an old pruning cut at the top of the trunk. Not a big carving job but a little tricky with so many mature and valuable branches around the area. 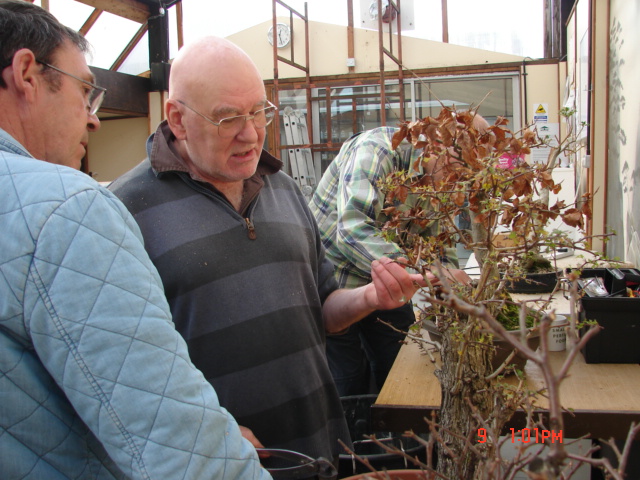 Hard to see in this photo but Darren’s second tree was basic raw material Hawthorn but with very interesting truly natural  deadwood features and great old bark, all of which we were careful to interfere with as little as possible whilst at the same time altering the obvious height reduction cuts. 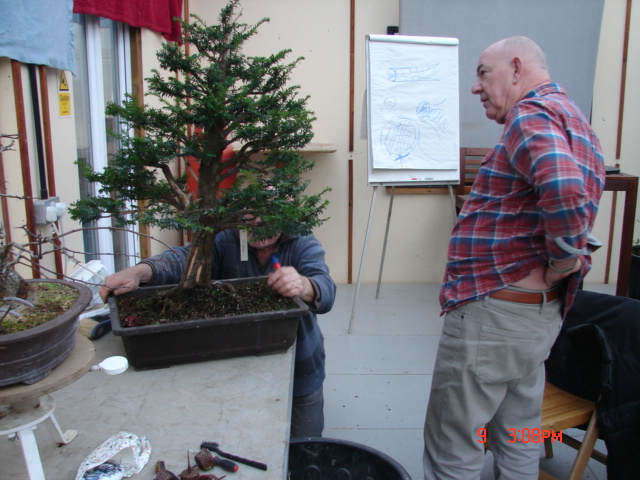 We had a quick look at Terry’s big Yew which we have worked on several times before and which is progressing very nicely. There was scope to take the shari and consequent live vein development a touch further though which Terry did himself after we had pinpointed the live veins. 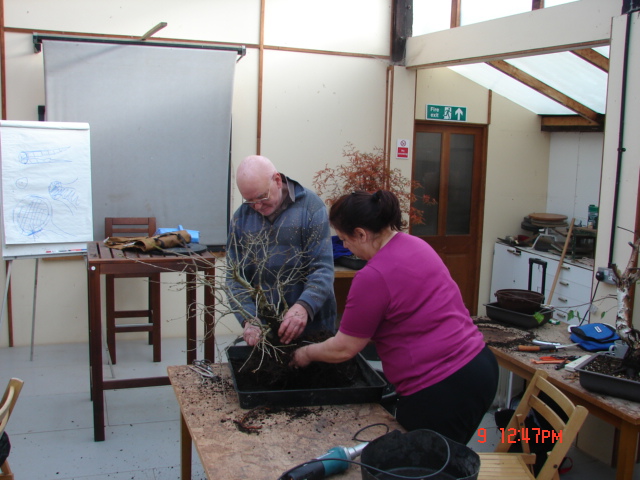 Our fourth participant, Angela, somehow got side tracked in to a re-potting exercise on her Oak raw material. Largely so as to reveal the several centimetres of trunk below soil level, unfortunately no magical nebari was evident but that’s the gamble you take with that sort of raw, field grown, stock. Nevertheless, a bonsai image was still possible and we finished up by dealing with the inevitable large pruning scars and some preliminary branch selection. The tree should be fine with thoughtful aftercare and greenhouse protection. 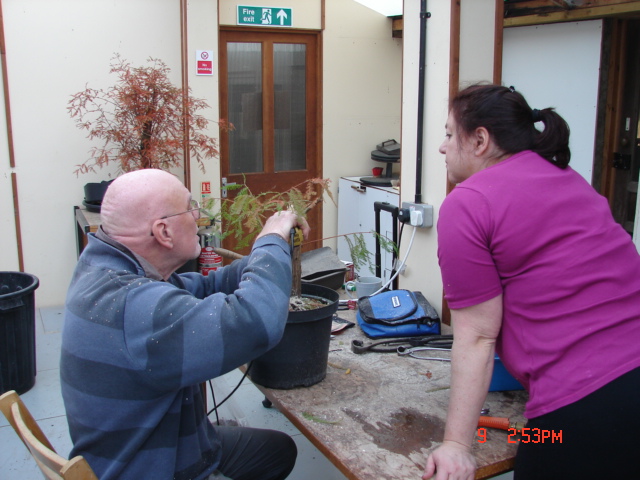 Final picture shows a simple bit of carving and another field grown bit of material, this time a Swamp cypress. Same sort of work as we did all day really.

Thanks to the participants and to Scott who performed valuable service not least in anticipating which tool was next required and making sure it was plugged in and ready to go, I swear he is a mind reader, I was spoilt !!  Oh, and he took all the photos too. Another fully subscribe sawdust workshop next Saturday.