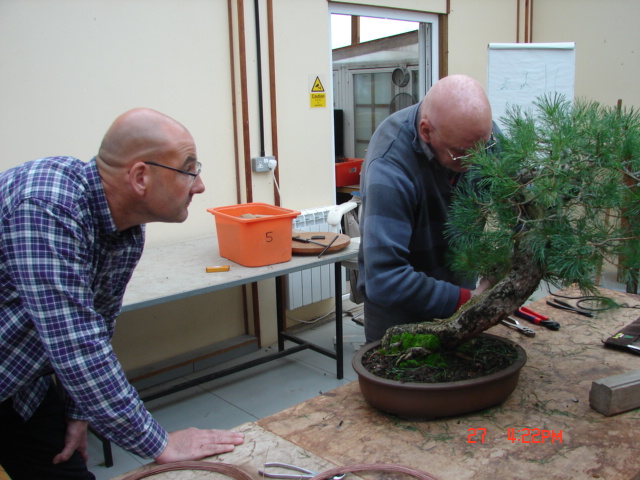 Three men, two trees  and one most enjoyable day ! Antony and myself were two of the men and the third was where he often is, behind the camera taking these photos, thanks Peter G. The two trees were both Pinus sylvestris, Peter’s was of Scottish origin. Whereas Antony’s came from Spain, purchased by Willowbog from the garden of David Benavente. The Scotty  belonging to Peter had been collected in Scotland something like fifty years ago by an enthusiast who lived in the Aberdeen area. We purchased the tree from his widow quite a while ago and since then the bonsai had been in the collection of a well known Willowbogger. After it came back here and Peter had bought it the tree got a re-style at a Ryan Neil workshop here. The image created then is being built on and refined gradually. Despite not needing to be moved a huge amount some of the old branches take a bit of persuading to adopt slightly different positions as the foliage mass develops. Antony’s tree had received one styling from raw material in Spain and it was time to modify the image to suit it’s new owner’s ideas and objectives, the tree had grown particularly well this year and the first job was a good clean out to prepare the tree for wiring. The Scots pine is a delightful species to work with, totally at one with our conditions and very responsive to correct management when being developed as bonsai.

So a very enjoyable day had by the three of us in the quiet, peaceful Willowbog studio.    It might not have been so quiet had I been in there working on a tree on my own, most likely our cattle would have been able to enjoy Joe Bonamassa guitar solos with me at the volume I usually listen to the CD  player at !