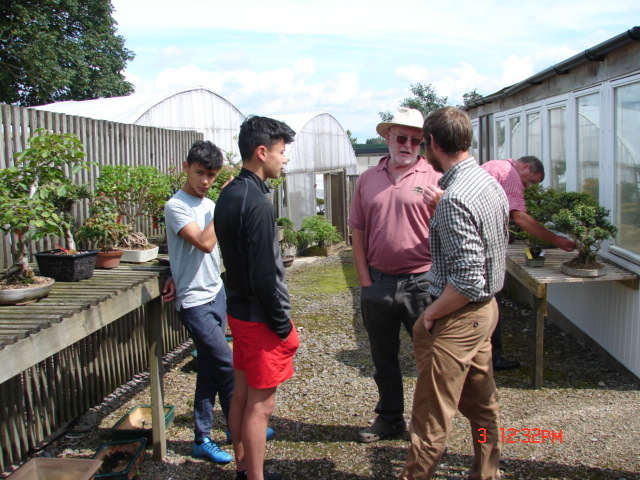 Another good Bonsai Chat here yesterday. We ended up with a good turnout despite a slow start to the day. Unmistakably Malcolm and in a ” noticeable ” yellow bowling shirt , suited the summer weather I guess. John G. in the foreground. Mike, Tony and John from left to right. Enjoying the sunshine and the chat by the looks of it. More chatting going on, me with Daniel and his two, rapidly growing upwards, sons. A newly qualified ‘ Willowbogger ‘ Kevin, checking out bonsai on the bench behind us natterers. A bit of tree work got done, John, on the left , talks to Terry about his nice False cypress. Antony got on with a bit of cleaning out on his Yew, Peter G’s larch on the table in the foreground. As is usually the case Peter took all these photos because I forget to do so, at least I remembered to bring the camera out into the studio in the morning, I forgot to even do that at last Saturday’s event here. Two very beautiful bonsai that Mike brought along to show us, the yew was a Willowbog origin tree. They are a great credit to you Mike. Peter took this photo of Jean’s vibrant and vigorous grape vine in the tunnel. Derek and his wife and their little dog just inside the nursery entrance. Tony and Paul cast their eyes over one of the benches on trees. Featured tree was this Japanese larch that was originally collected by the just mentioned friend Dave. This nice bonsai now resides on Tyneside and was here with some other trees in the same collection on holiday care. And one of The Proprietor’s ikebana composition complete the display  and completes this post. Thanks to all who supported our  community day.