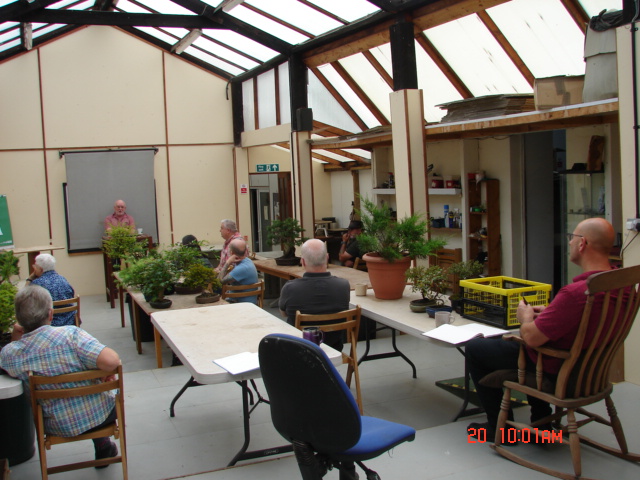 According to my Highland Cattle calendar ”Iuchar” is the Gaelic word for July. Anyway, yesterday saw our seventh monthly workshop of the year here at Willowbog Bonsai. I had rather rashly accepted eleven bookings for the workshop but in the event, somewhat to my relief it has to be said, two failed to turn up which left nine participants. Those nine consisted of mainly regulars. With the mostly warm sunshine that we had ” enjoyed ” for the bulk of the week, in which circumstance the studio quickly becomes unbearably hot, I had feared that we might have been able to use the building, either not at all, or at best for only a brief period at the start of the workshop.

In the event the sun held off for enough time for us to complete our standard introductory discussion session. We talked about a number of issues, watering mainly as it was a task that had seemed to me to be all consuming in previous days ! I managed to get through with only one mention of Highland cattle and that was not my fault, I was led into it by one of our regulars who enquired about our newborns ! One item we talked about was summer pruning of deciduous species. In front of me was Elaine’s Chinese elm which had been allowed to grow quite rampantly so as to increase the tree’s vigour. In this case Willowbogger Gary’s Korean hornbeam required thickening of the trunk extension in the top of the bonsai so the extension growth was allowed to remain and continue to fulfil that function. As always there was quite a range of tree species presented with a wide range of work to be carried out. In the foreground is newcomer Ken, attending his first Willowbog workshop, with a newly acquired Juniper bit of raw material in a garden planter. At this stage, with the clock on the wall showing half eleven, the heat was beginning to build with the sun now high in the sky. Nearly time to wrap up the first phase of the workshop and allow those who wished to decamp out into the fresh air, or into shadier buildings in which to work on their trees. Paul gets some wiring advice from young Scott. And I go through the pruning of Gary’s nice Hornbeam with him. Seemingly happy with the slightly lower temperature in the ” New greenhouse ”  Willowbogger Antony worked away on his Chinese juniper. As did Martyn down the other end with his back to the camera, his tall yamadori Hawthorn if front of him. On the extreme right of the photo we can just make out The G-man’s Japanese larch, Peter was behind the camera for most of these images so my thanks to him for remembering to record the day, something that I invariably neglect to do ! Martyn was busy with a wee White pine prior to the significant reduction of that Hawthorn that we carried out a bit later on. Penny also worked in the same building on trimming her Japanese white pine. Elaine made the remarkable effort of a three hour each way drive to and from her home over the border to join us for the day. She had a couple of nice, small, larch to work on as well as that Chinese elm we saw earlier on. Elaine seemed to enjoy the warmth of the studio for the whole day. To be fair the afternoon  did bring the odd brief shower of rain that fetched all the outside working folk back indoors for the duration of. My tokonoma display for the workshop yesterday. Nice to see this lovely Acer palmatum back at the nursery albeit for a brief sojourn. This bonsai was for some years part of The Willowbog Collection before going off to it’s new owner. Back here for holiday care and a bit of attention. My thanks as always to all the nine participants and to Caz and Scott for their valuable assistance, as well as Peter G. for remembering to take some photos as well as trying to participate in the workshop.