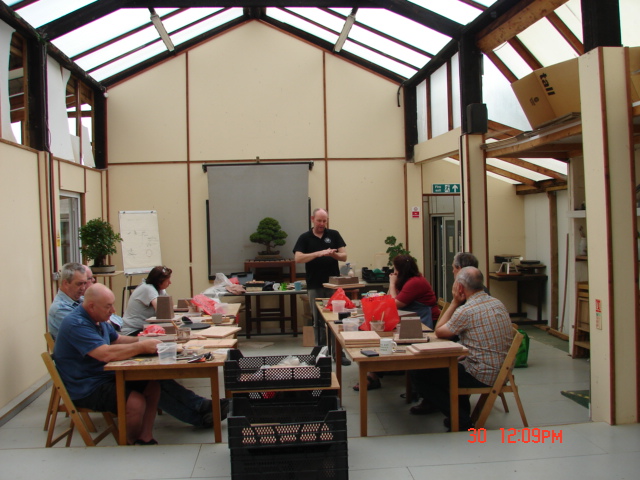 Seven enthusiasts assembled at Willowbog Bonsai on Sunday just gone, the 30th June, for some training in the crafting of a bonsai pot. The gentleman [using the word in it’s loosest possible sense]  doing the training was Mr. David Jones of Walsall Studio Ceramics. Seen here strutting about in the centre of the picture, in the black tee-shirt. Four Willowboggers down the left-hand side, top to bottom, Terry, David, Ian and Caz. And three down the other side in the same order, another Ian, Kevin and Angela. The pots being made by the participants were variations on tow basic shapes, the rectangle and the cascade. Maybe only Caz had taken part in one of David’s pot making workshops here previously. Less than an hour into the workshop and already the pots are taking shape.  Must be easy this pottery lark, money for old mud I reckon !!! I am wondering if the timer on my camera is all to pot [ sorry for the pun ]  because I don’t think they actually had made this sort of progress that quickly. Time for them all [ except Terry ] to watch David carry out the next stage of the operation. We have known David Jones for decades now and he never losses either his enthusiasm for ceramics nor his love of just making pots, and actually, very much to his credit, a delight in helping others turn his dirty old mud into beautiful bonsai pots. Over those decades he has conducted countless pot making workshops here and every participant is always unfailingly delighted in what they are able to achieve under David’s potty training techniques. They may have never touched a lump of clay in their lives before but David can make sure that they go home [ though not immediately ]  with a pot that they can be proud of. Demonstrating how to fit the feet.  Each participant chooses whether glazed or un-glazed. If it’s glazed then picks a colour that they like. These details are all noted down, David takes the completed pots home and does the firing and glazing and somehow or other the pots are returned to Willowbog so that the owners can collect them, usually only a matter of a few weeks after the workshop. Trust Caz to make something a bit different. She actually had the cheek to ask for a discount because some bits of her pot were missing !!! My thanks to the participants for supporting the event and contributing to the delightfully humorous atmosphere that pervaded the studio all day, mostly at my expense. Mostly though I offer my thanks to David Jones of Walsall Studio Ceramics for yet another great bonsai related day here at the nursery. I confidently predict that it won’t be long before we add another Jonesy mud bashing day to our event schedule.