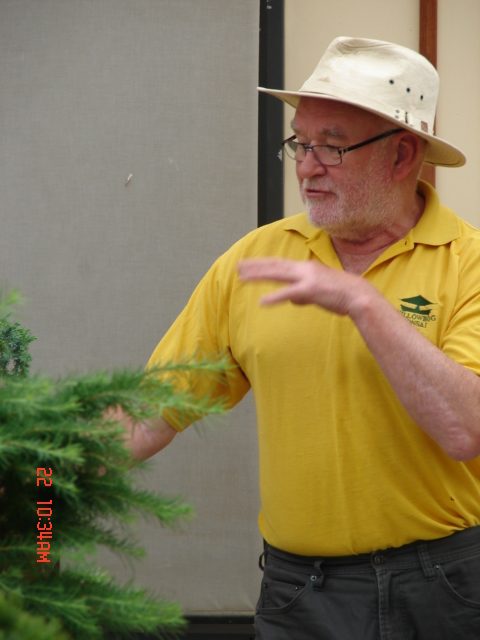 And a pretty good workshop it was as well, even if I say so myself ! I think that we had eight participants which is just a nice number, particularly when I have a bit of help ! As well as some very familiar faces we welcomed three new folk to our regular monthly workshop, two of whom were also making their first visit to the nursery. At the start of the day I entertained them all with my Tommy Cooper impression. The G-man, to  whom I must thank for most if not all of these photographs, clearly has artistic pretensions looking at this image that he recorded, now all he needs to do is extend those ambitions to his bonsai !  Actually I now see, looking more closely at this image, that the afore mentioned Willowbogger is sat on the extreme right of the photo which means that it must have been taken by either Caz or Scott, Caz would be my guess as Tyke seems to be sat on the photographer’s knee ! Yes, Scott would appear to be too exhausted to even pick up the camera. When taking the lead in a workshop like ours, what is much more important than anything that you  actually say, is the pose that one adopts when delivering those pearls of wisdom !  The hours that I spend on my own in this building rehearsing those positions would have to be seen to be believed ! We did eventually get on with some serious bonsai work. In all seriousness I am extremely fortunate to be able to call on the support of such an experienced bonsaist as Caz on these workshop days. Here she is helping Willowbogger Norma with her Western hemlock, purchased from a highly reputable nursery etc, etc. Penny is another regular participant although a series of unfortunate mishaps have prevented her from attending for some time so there was a bit of catching up to do with some of her bonsai, here we discuss a couple of her Japanese larch, purchase from a …………………..and so on ! There was a bit of pruning required ! John B. working away on his very nice ex Len Gilbert Cedrus libani . On the table on the far side of John was dedicated Willowbogger Angela with a range of her bonsai before her, she seemed to be enjoying her day ! This photo might suggest that Scott spent the entire day in that chair but that would not be true, in fact he watered all the bonsai on the benches and still made time to help a bit with some of the workshop participants, thanks Scott.  Caz, on the other hand did spend most of the sitting with Tyke on her knee, the earlier photo showing her working was carefully staged ! To be fair to Tyke he did actually get about a bit, mainly in attending Norma when she was dishing out doggy treats at lunchtime. Ah, there is the G-man although I think he needs more work on this character that he is attempting a portrayal of , I personally don’t have a clue !  Come to think of it he may just be being his normal grumpy self !

Thanks to all the participants and to Caz and Scott,  and Tyke, a pretty good Willowbog day and I don’t think that I mentioned the cows once !